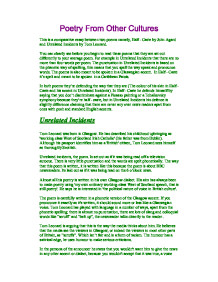 Tom Leonard is arguing that this is the way the media thinks about him. He believes that the media see the viewers in Glasgow, or indeed the viewers in most other parts of Britain, as "scruffs". Which isn't fair and is a form of racism. The humour has a satirical edge, he uses humour to make serious criticisms. In the persona of the announcer he states that you wouldn't want him to give the news in any other accent or dialect, because you wouldn't accept that it was true, a voice speaking in a working class accent and using slang is given less credit and has less authority than a BBC voice. Halfe - Cast I think that the gentleman writing this poem (in a rather strange vernacular I own) is somewhat confused. To my mind 'half-caste' refers to one born of two parents, one of a race where the predominant skin colour is black and the other typically white European, or white European origin. The author seems to have ascribed the suggestion that 'half-caste' also implies a series of negative value judgements about character, expectations, lifestyle and intelligence on to the term, when in fact there is no such allocation. ...read more.

So the way the poem is written suits what it's trying to say. The speaker in the poem ridicules the use of the term 'half-caste' by following the idea through to its logical conclusion: Should Picasso be seen as second-rate because he mixed a variety of colours in his paintings? Should the English weather be scorned because it is full of sun and darkness? Should Tchaikovsky's music be seen as inferior because he used both the black notes and the white notes on the piano? Is someone who is called a 'half caste' only half a person? John Agard asks the reader to begin to think in a more open-minded way. The poem is set out is a peculiar way as it only contains a maximum of 8 words per line. Also this poem contains no punctuation at all. I think that this is put in to create an impact on the reader. He has also spelt his words the way as he would speak them. It's a way of phonetic speaking. Overall both poems are tying to prove the same point, that they are discriminated because of who they are. John Agard for being half - cast and Tom Leonard because of his Scottish accent. By Alex Bowring 11m2 ?? ?? ?? ?? ...read more.