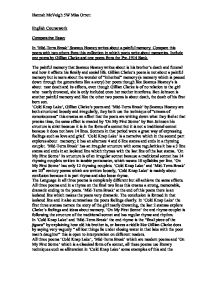 English Coursework Comparative Essay In 'Mid-Term Break' Seamus Heaney writes about a painful memory. Compare this poem with two others from this collection in which poets write about memories. Include one poem by Gillian Clarke and one poem from the Pre-1914 Bank. The painful memory that Seamus Heaney writes about is his brother's death and funeral and how it affects his family and social life. Gillian Clarke's poem is not about a painful memory but is more about the wonder of "inherited" memory (a memory which is passed down through the generations like a story) her poem though like Seamus Heaney's is about near death and its effects, even though Gillian Clarke is of no relation to the girl who nearly drowned, she is only included once her mother interferes. Ben Johnson is another painful memory and like the other two poems is about death, the death of his first born son. 'Cold Knap Lake', Gillian Clarke's poem and 'Mid-Term Break' by Seamus Heaney are both structured loosely and irregularly, they both use the technique of "stream of consciousness" this creates an effect that the poets are writing down what they feel at that precise time, the same effect is created by 'On My First Sonne' by Ben Johnson his structure is strict because it is in the form of a sonnet but it is not a traditional sonnet because it does not have 14 lines. ...read more.

All three poems 'Cold Knap Lake', 'Mid-Term Break' which are modern poems and 'On My First Sonne' which is a classical form of a sonnet, all these poems use literary techniques such as alliteration in 'Cold Knap Lake' some examples of this and the meanings behind them are "we once watched a crowd." The repeated sound of "w" and "ow" create a feel of water which is one of the main themes of 'Cold Knap Lake', there is also "drawn by the dread of it" creates a feeling of horror and fear, also the fact that people are curious about death. 'Mid- Term Break' also uses alliteration such as "counting bells knelling classes to a close" which is like the sound of bells, knelling is the sound of funeral bells so the poet being able to hear the sound of funeral bells all ready and it being near the beginning of the poem means that there is a strong atmosphere of tension and sorrow already. Also "four foot box a foot for every year" is a repeating of the "f" sound which is soft and sorrowful. There was also many uses of sibilance which is a form of alliteration but is the repetition of the "s" sound and is used to give a sense of evil or as in 'Cold Knap Lake' it is used to give ...read more.