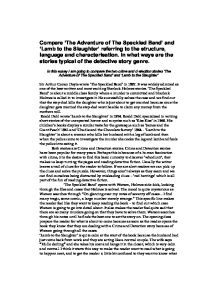 Compare &amp;#145;The Adventure of The Speckled Band&amp;#146; and &amp;#145;Lamb to the Slaughter&amp;#146; referring to the structure, language and characterisation. In what ways are the stories typical of the detective story genre.

Compare 'The Adventure of The Speckled Band' and 'Lamb to the Slaughter' referring to the structure, language and characterisation. In what ways are the stories typical of the detective story genre. In this essay I am going to compare the two crime and detection stories 'The Adventure of The Speckled Band' and 'Lamb to the Slaughter' Sir Arthur Conan Doyle wrote 'The Speckled Band' in 1892. It was widely admired as one of the best written and most exciting Sherlock Holmes stories. 'The Speckled Band' is about a middle class family where a murder is committed and Sherlock Holmes is called in to investigate it. He successfully solves the case and we find out that the step-dad kills the daughter who is just about to get married because once the daughter gets married the step-dad wont be able to claim any money from the mothers will. Roald Dahl wrote 'Lamb to the Slaughter' in 1954. Roald Dahl specialised in writing short stories of the unexpected horror and surprise such as 'Kiss Kiss' in 1960. His children's books display a similar taste for the grotesque such as 'James and the Giant Peach' 1961 and 'Charlie and the Chocolate factory' 1964. . 'Lamb to the Slaughter' is about a woman who kills her husband with a leg of lamb and then when the police come to investigate the murder she cooks the leg and lamb and fools the police into eating it. Both stories are Crime and Detection stories. Crime and Detection stories have been popular for many years. Perhaps this is because of a human fascination with crime, it is the desire to find this basic curiosity to discover 'whodunit', that makes us keep turning the pages and reading detective fiction. Usually the writer leaves a trail of clues for the reader to follow. If we are alert readers we can pick up the clues and solve the puzzle. ...read more.

The author's intentions in 'The Speckled Band' are for us to see Holmes as a very clever man who solves the case very well. In 'Lamb to the Slaughter' Roald Dahls intentions are for us to see the police as un-professional. We admire Holmes because he solves the case well, like in many of Conan Doyles other books, however we despise the police for dealing with the crime in an un-professional manner. Holmes superhuman thinking proves to us that he is a great decetive. He notices the red herrings are there to fool him and unless you study the book in great depth you may be able to pick out the killer but not how he/she did it. However, the police assume a man did the murder, take wine and drinks from the woman, and eat the leg of lamb which is very unprofessional and leads them to probably not solving the case. Holmes dominates the story because he doesn't give away how the murder happened until the end which keeps the reading and always asking questions like "What is Holmes thinking?" and wanting to know what Holmes thoughts are. He doesn't give away any of the case to Watson or anyone he might know because they might take all the credit for the case, or, not solve it aswell as he did. The writers use the detectives to show attitudes at the times of writing because Holmes is a very professional detective and when the book was wrote that was how detectives were meant to be. However, the police are very laid back and 'Lamb to the Slaughter' is actually quite humorous at times, if Conan Doyals audience had read that they would be quite shocked, because they would hope that doesn't happen in real life and would like the investigation to be done in a professional manner. Also, if Doyle had wrote about a woman his audience would be shocked. ...read more.

Mary just giggles at the end, it says "and in the other room Mary Maloney began to giggle". This tells us she is not bothered about killing her husband and knows she is not going to go found out as the police are very na�ve. The readers are left thinking that Holmes is a good detective whereas Mary has covered up her murder well and is a good lier and actor, whereas we do hope she is going to get found out! If the ending of 'The Speckled Band' was like the ending of 'Lamb to the Slaughter' Doyles audience would be shocked as they would have not have liked to not know what happens to Mary. This shows us how times have changed. 'The Speckled Band' is probably the more appealing because as the book progresses the reader can try and guess how the murder was committed, and it has a better plot. However, I preferred the 3rd person narrative way of writing in 'Lamb to the Slaughter' because it was less confusing. I enjoyed both stories, because in 'The Speckled Band' I liked trying to guess how the murder was committed and in 'Lamb to the Slaughter' I liked being in suspense to see if she got found out. Both stories are very compelling however, 'The Speckled Band' is probably more interesting and gets the reader more involved. As a conclusion to this essay I can tell that Crime and Detection stories have changed a lot and they come in all different sorts. We can tell this from the two stories I looked at because they are each very different and have got a very different plot/style of writing. Murder stories have changed a lot since Victorian times to modern times, they range from having a female killer instead of a male and the reader actually knowing how the murder has taken place to trying to guess. Crime and Detection stories are all very different and as time goes on will probably keep changing. Sarah Evans 10L ...read more.