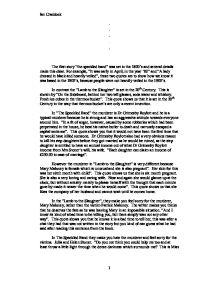 YEAR 10 ESSAY, COMPARE "THE SPECKLED BAND" AND "LAMB TO THE SLAUGHTER" The first story "the speckled band" was set in the 1800's and several details make this clear. For example, "It was early in April, in the year '83" and "A lady dressed in black and heavily veiled", these two quotes are to show how we know it was based in the 1800's, because people were not heavily veiled in the 1900's. In contrast the "Lamb to the Slaughter" is set in the 20th Century. This is shown by "On the Sideboard, behind her two tall glasses, soda water and whiskey. Fresh ice cubes in the thermos bucket". This quote shows us that it is set in the 20th Century in the way that thermos bucket's are only a recent invention. In "The Speckled Band" the murderer is Dr Grimesby Roylott and he is a typical murderer because he is strong and has an aggressive attitude towards everyone around him. ...read more.

This quote shows us that she likes the company of her husband and cannot wait until he comes home. In the "Lamb to the Slaughter", they make you feel sorry for the murderer, Mary Maloney, rather than the victim Patrick Maloney. The writer makes you thinks that he deserves the fate as he was leaving Mary in an impossible situation. "And I know its kind of a bad time to be telling you, but there simply was not any other way". This quote shows you that he knows it is a bad time to tell her, this was after a chat they had that was not written in the story but you kind of can guess what he had said after reading this sentence from the book. In The Speckled Band they make you hate the murderer and feel sorry for the victims. Julia and Helen Stoner. "Do you not think you could help me too and at least throw a little light through the dense darkness which surrounds me? ...read more.

This quote shows you that the police ate all the evidence and tells you that they are unaware that you could kill someone with a leg of lamb, even though it has lots of weight behind it to help. They also don't realise that a woman could kill someone. Both stories are murder mysteries but because they are written at different times they are very different. The Sherlock Holmes story is very traditional because the murderer is a typical evil person and has a strong motive. It is set in a traditional British Country Mansion. There is a lot of suspense in the story, as you don't know who the murderer is until the end. There was justice in that the murderer got killed by what he was trying to kill his stepdaughters with. Whereas "The Lamb to the Slaughter" is more unusual and introduces twists, for example the murderer is a female, the sympathy is on the murderer. The reader knows who done it from the start and there was no justice for the murderer just the victim. Ian Craddock 1 ...read more.