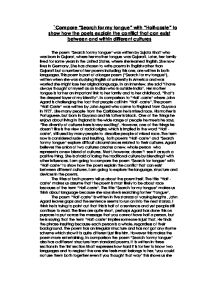 `Compare Search for my tongue with Half-caste

`Compare "Search for my tongue" with "Half-caste" to show how the poets explain the conflict that can exist between and within different cultures The poem "Search for my tongue" was written by Sujata Bhatt who was born in Gujarat, where her mother tongue was Gujarati. Later, her family lived for some years in the United States, where she learned English. She now lives in Germany. She has chosen to write poems in English rather than Gujarati but a number of her poems including this one, are written in both languages. This poem is part of a longer poem ("Search for my tongue"), written when she was studying English at university in America and was worried she might lose her original language. In an interview, she said "I have always thought of myself as an Indian who is outside India". Her mother tongue is for her an important link to her family and to her childhood, "That's the deepest layer of my identity". In comparison to "Half-caste" where John Agard is challenging the fact that people call him "Half-caste". The poem "Half-Caste" was written by John Agard who came to England from Guyana in 1977. Like many people from the Caribbean he is mixed race. His mother is Portuguese, but born in Guyana and his father is black. ...read more.

This may be partly because this is a poem that is written to be performed aloud. He uses lower case where Standard English would use capital letters. Even proper names like "picasso" and "tchaikovsky" are written in this way. This creates a strong effect and shows that Agard does not feel that these people are not any higher than he is, just because they are famous. Agard fuses the English language with his native dialect to create his own language. He writes in Caribbean dialect, for example, "yu" instead of "you" and "dem" for "them". Agard chose to fuse the Caribbean dialect with the English language to create something new because he wants to create a new identity for himself by mixing his accent with his language. This is very interesting because this amuses the reader therefore it is a good mixture of dialect and language. John Agard is implying that the term 'Half-Caste' is not something bad, as people make out it to be; in fact it is a positive thing because here he has combined half of the English language and half the Caribbean dialect to create something new which is positive. "Half-caste" and "Search for my tongue" are both written in different styles but are equally effective. ...read more.

The poet wants us to see the importance of the "mother tongue" to someone living in a different society because they are using a "foreign" language but do not want to forget their culture. In conclusion, in "Search for my tongue" Sujata Bhatt finds it difficult to maintain two different languages and to keep up with two cultures. She uses Gujarati and English in her poem to keep both languages and cultures alive. Bhatt makes the reader realise the difficult situation she is in and makes the reader understand how awkward it must be. In contrast, in "Half-caste" John Agard does not agree that being "Half-Caste is a negative thing. Agard believes a mixture of two can be equal to something positive and greater. John Agard challenges the fact that people think he is inferior to them because he is "Half-caste". I think that both poems are effective in their own ways; they have put their message across in a very entertaining way. I particularly like the way Bhatt uses Gujarati in the poem it is very effective because the reader can tell how difficult it is and have a go to help maintain her language. I also like the style Agard has chosen to write in, the mixture of dialect and language is a really successful and entertaining. Both poems have created a positive response on the reader. ...read more.