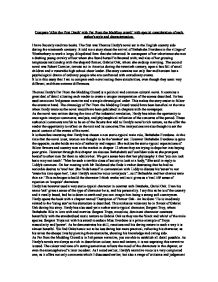 Compare 'After the First Death' with Far From the Madding crowd,' with special consideration of each author's style and characterisation.

Compare 'After the First Death' with Far From the Madding crowd,' with special consideration of each author's style and characterisation. I have Recently read two books. The first was Thomas Hardy's novel set in the English counrty side during the nineteenth centuary. It told me a story about the arrival of Bathsheba Everdene in the village of Weatherbury to work a large, dilapidated farm that she inherited. In consequent of her inheritence she met a dashing young cavalry officer whom she found herself infanuated with; and also of her growing temptuous realtionship with the shepard-farmer, Gabriel Oak, whom she ends up marrying. The second novel was Robert Cormier, terroist act in America during the twentieth century, upon a bus full of small children and a vunerable high school cheer leader. She story contains not only fear and heroism but a psychological drama of ordinary people who are confronted with extrodinary events. It is in this essay that I am to compare each novel noting there simularities, even though they seem very different, and there extreme differences. Thomas Hardy's Far From the Madding Crowd is a political and common cultural novel. It contains a great deal of detail allowing each reader to create a unique interpretation of the scenes described. He has used omnicient 3rd person narative and a simple chronolgical order. This makes the story easier to follow the events at hand. ...read more.

This also explains that Hardy uses a slight 'cliff hanger' and the end of each chapter, prevoking readers in wanting to know what will hapen next chapter. Robert Cormiers, 'Afer the First Death' is a complex and contraversal novel. It tackles an amzing depth of emmotions on its few characters shown allowing the audience to feel truley involved in the emmotional warfare being lay infront of them. Cormier has used a complex sturcture where we find him using every other chapter to describe the thoughts of Ben. He does this by using a technique called interior monologue which aims to give directly to the reader a character's thought. It is interesting that he uses both 3rd person naravtive and 1st person narative when needing to give a extra impression of how a character is truely reacting. The narative is set in two stories. One is in the future looking back, which is the alternate paragraphs occupied by 'Ben,' the other in the present using the 3rd person narrator telling the story of the terroist act as it happens. Cormier Shifts the veiw points of the characters in such a way which adds depth to the narrative and allows us to noticed what effects the characters have on each other, which makes the story line more realistic. Once characters are established we find Rober Cormier following a flow of inevitability. ...read more.

Inevitably, this creates a deep connection between them and the characters. I can conlcude that due to the Terroist situation of our time now, 'After the First Death', will therefore hold more relevance the the modern day reader. However, 'Far From the Madding crowd', is much more complexed and cultured yet is meily tackle industrial problems of the eighteenth centuary, which may appeal to the elder reader, but this depends on a personal preference. The authors of each novel have included a geat involvment of characters; each containing a sterio-typical aspect to their characters used, which is a technique enabling the reader the relate to certain qualities. Robert Cormier creates a deeper relationship and involment between reader and personality of the character. Thomas Hardy has a very srong and involved narrative voice, unlike Robert Cormier, who leaves the description of events and ideas through the development of the characers and the plot. The intended audience is obviously to be different as they are written in completely different centuarys.In my opinion, 'After the first Death' appeals to the younger generation, as it has less complex language and a stronger type of 'adventure' in the plot which appeals to them. In comparison, 'Far from the Madding crowd', appeals to the more 'rustic' concerned characters, who enjoy the courtyside imagry. I personally feel that both novels are successul in fufilling their aims to achieve the type of enjoyment intended audinces require. ...read more.