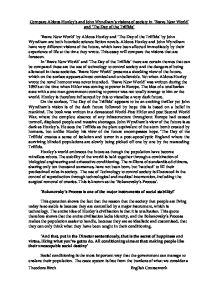 Compare Aldous Huxley's and John Wyndham's visions of society in 'Brave New World' and 'The Day of the Triffids'.

Wyndham's world is that of disarray. The book opens to Bill Masen, who is in hospital waiting to have his bandages removed. The awareness of impending disaster is encapsulated in the opening words 'When a day you happen to know is Wednesday starts off by sounding like Sunday, there is something seriously wrong somewhere' Attacked by a Triffid in his youth Bill Masen had sight immunity to Triffid stings. He worked at a Triffid factory until a Triffid attacked him leaving him blind. During, the night, he hears people exclaiming about there being the most incredible meteor shower that the world has ever seen. A once in a lifetime event that he misses because he can't take of his bandages yet. The next morning Bill wakes to find that almost the entire world has gone blind. 'I should become a looter, a sacker, a low scavenger upon the dead body of the system that has nourished me. Such a foolishness niceness of sensibility in a stricken world!' This quotation shows how a controlled Capitalist system has changed to a world with catastrophic disorder, plainly because the whole world cannot see. People are committing suicide, looting the streets and the blind capture the sighted in order to survive. The blind aimlessly wander the streets in hopeful search for food. Humans always had an advantage over Triffids that they could see. ...read more.

Wyndham's idea of alienation is altogether different to that of Huxley's. The characters in 'The Day of the Triffids' are not alienated from a society; they are alienated from all sorts of civilisation, because there is not any left. Society has been ruined and so the survivors are alienated from everything that used to be normal to them. They have to start a new life. 'The deadness, the finish of it all, was italicised there.' This quotation shows the fact that Bill feels alienated because he is in the world where only the sighted survive. There are so few sighted people that he feels that he is the only one to be in desolate London. All the other sighted people have gone to begin there lives somewhere else, so they have no need to come back to London. Therefore the conclusion that I come to is, that both John Wyndham's and Aldous Huxley's views of the future are very different. Huxley says that there is no hope for the future, that the human race shall be totally controlled by what one man desires. The human race shall become monotonous machines which will not ever have the power of free will. This however is what distinguishes man from machines, therefore making the plight for man pathetic and ironic. John Wyndham's however says that yes Man will help to cause its self a catastrophe but there is hope for Man in the end because he on the whole is good. Theodora Birch English Coursework ...read more.