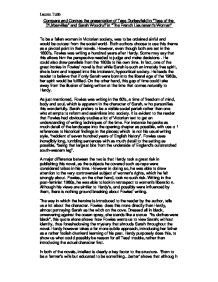 Compare and Contras the presentation of Tess Durbeyfield in &quot;Tess of the D'Urbervilles&quot; and Sarah Woodruff in &quot;The French Lieutenant's Woman&quot;

Compare and Contras the presentation of Tess Durbeyfield in "Tess of the D'Urbervilles" and Sarah Woodruff in "The French Lieutenant's Woman" To be a fallen woman in Victorian society, was to be ordained sinful and would be outcast from the social world. Both authors choose to use this theme as a pivotal point in their novels. However, even though both are set in the 1800's, Fowles was writing a hundred years after Hardy. Some may say that this allows him the perspective needed to judge and make decisions. He could also draw parallels from the 1800s to his own time. In fact, one of the great ironies in Fowles' novel is that while Sarah is such an innately free spirit, she is born and trapped into this intolerant, hypocritical society. He leads the reader to believe that if only Sarah were born into the liberal age of the 1960s, her spirit would be fulfilled. On the other hand, this gap of time could take away from the illusion of being written at the time that comes naturally to Hardy. As just mentioned, Fowles was writing in the 60's, a time of freedom of mind, body and soul, which is apparent in the character of Sarah, who personifies this wonderfully. Sarah prefers to be a visible social pariah rather than one who attempts to reform and assimilate into society. ...read more.

Whilst Sarah tries to culminate the same feelings for herself, the reader is unsure about the character and as we learn more about her we dislike her as a character, thus not created any sympathy for her. Hardy makes his opinion of Tess clear to the reader from very early on, showing what an honourable "maiden" she is. Tess feels that, as the oldest child, she has a great responsibility for her family. When the horse dies in an accident, Tess feels duty-bound to go to Mrs D'Urberville's home to claim kin as she believes that she is to blame. When her father is taken ill, Tess returns home to care for him and work the field. Her devotion to her family and sense of responsibility for them are admirable qualities. Tess is guided by her morality and desire to do what is right. Tess is presented consistently as an innocent victim. Tess didn't understand Alec's intentions, as she was sexually unaware as her mother selfishly didn't warn her about men so that Tess would still go and get money. Tess never tried to manipulate anyone, even telling Angel to divorce her simply for what she has done in the past; also she even tries to persuade Angel to look at the other milk maids as she deems herself unworthy for him, "I am not good enough - not worthy enough". ...read more.

This method allows the reader to actually consider the opinions of the author, rather than just accepting the subliminal suggestions of Hardy. John Fowles and Thomas Hardy both write on very similar subjects; their stories circulate around very strong, rebellious women who are fighting the social conformities set down by their male oppressors. Fowles tells the story from the point of view of Charles, and hence we do not gain full insight into Sarah's thoughts, making it difficult to connect and understand her as a character. This is Fowles' downfall as you can't feel emotion for a character if you do not understand what they are thinking; which strikes the question, is Sarah actually realistic as a 19th century heroine as Fowles' himself does not display sympathy for his own character. Hardy presents Tess as a very moral person from the very beginning of the novel, and in displaying her as a genuinely good person which generate the feeling of tragedy around her. Fowles presents Sarah as a miss guided, trouble individual, not even sure of her self, with a questionable mental state; a strange character that does not possess the power to evoke much emotion from the reader. These two heroines both depict a stance in Victorian society, however in very different ways; Sarah through illustrating the division between class, and Tess through her portrayal of the unfairness of Victorian morality. ?? ?? ?? ?? Lauren Tubb ...read more.