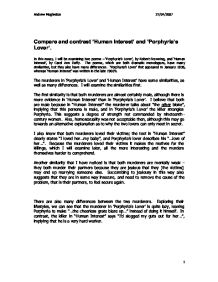 In 'Porphyria's Lover', the murderer kills Porphyria because she is "...too weak..." to free her heart's passion "...from pride, and vainer ties...". In other words, he commits murder because Porphyria has not got the willpower to leave her higher-class family to marry her one true love (the murderer), so he kills her to prevent her marrying someone else. Similarly, the murderer in 'Human Interest' kills his partner to prevent her from going off with another man. I will now compare and contrast the aftermath of the murders, paying particular attention to how the murderers feel, and what happens next. In 'Porphyria's Lover', the aftermath of the murder is portrayed very well, unlike 'Human Interest', which is summed up very quickly. We see that Porphyria's lover does something very unusual after he's carefully strangled her - he remains with her. Instead of panicking, he "...warily oped her lids...", and laughs at her unblemished "...blue eyes...". So, we see that he is happy, and we can also note that he is proud that he has not been discovered - "...and I, it's love, am gained instead ... yet God has not said a word". These are very strange feelings for someone who has just committed a terrible crime, and it suggests that he feels no guilt. ...read more.

informal, colloquial language is used. This gives the impression that the persona no longer cares, and can't even be bothered to speak properly. The text is also in a confessional style, which is typical of Duffy. 'Porphyria's Lover', on the other hand, is quite a formal style, and the persona is simply telling the story, without any obvious guilt. In 'Porphyria's Lover', Browning has used exaggeration for effect by having the persona say that he wound Porphyria's hair "...three times her little throat around...". I believe this to be exaggerated because, if it were true, Porphyria's hair would have to be about four feet long, which is ridiculous. There is no exaggeration in 'Human Interest', but there is a lot of isotropy - the persona repeatedly emphasised the point that he loved his victim. This is demonstrated in quotes like "I loved her", "my baby", and "...she wasn't a tart...". He also emphasises his angry reaction to her infidelity - "...thirty seconds to complete", "I stabbed", "she stank of deceit". Finally, both poets use enjambment, albeit irregularly. This shows long and deep, but slightly erratic, thought at times by both personas. After reviewing 'Porphyria's Lover' and 'Human Interest', I have found that they are very similar in many ways, although they do have their differences. Both poems are based on the theme of murder for love, and murder resulting from jealousy. Andrew Mugleston 27/04/2007 1 ...read more.