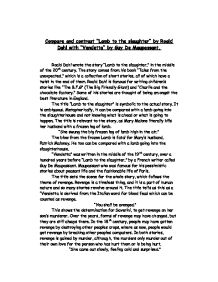 Compare and contrast "Lamb to the slaughter" by Roald Dahl with "Vendetta" by Guy De Maupassant. Roald Dahl wrote the story "Lamb to the slaughter," in the middle of the 20th century. The story comes from his book "Tales from the unexpected," which is a collection of short stories, all of which have a twist in the end of them. Roald Dahl is famous for writing children's stories like "The B.F.G" (The Big Friendly Giant) and "Charlie and the chocolate factory." Some of his stories are thought of being amongst the best literature in England. The title "Lamb to the slaughter" is symbolic to the actual story. It is ambiguous. Metaphorically, it can be compared with a lamb going into the slaughterhouse and not knowing what is ahead or what is going to happen. The title is relevant to the story, as Mary Malone literally kills her husband with a frozen leg of lamb. "She swung the big frozen leg of lamb high in the air." The blow from the frozen Lamb is fatal for Mary's husband, Patrick Maloney. He too can be compared with a lamb going into the slaughterhouse. "Vendetta" was written in the middle of the 19th century, over a hundred years before "Lamb to the slaughter," by a French writer called Guy De Maupassant. Maupassant who was famous for his pessimistic stories about peasant life and the fashionable life of Paris. The title sets the scene for the whole story, which follows the theme of revenge. Revenge is a timeless thing, and it is a part of human nature and so many stories revolve around it. The title tells us this as a "Vendetta is derived from the Italian word for blood feud which can be counted as revenge. "You shall be avenged." This shows the determination for Saverini, to get revenge on her son's murderer. Over the years, forms of revenge may have changed, but they are still always there. ...read more.

Once again, it is not very professional for them to accept this offer yet they are easily persuaded to stay for tea. While the officers are eating the lamb, Mary hears them talking about the murder. "Probably right under our very noses." This line is ambiguous as he is saying the line because he feels that the weapon must be close by, yet it really is right under there noses, as they are actually eating the meat. In this story, Roald Dahl makes the police out to be stupid and unprofessional. This is not a very good image, but it is one of truth and the reader can easily associate with it. "Vendetta" has the same theme throughout it as "Lamb to the slaughter." This proves that revenge has been around for a long time. "Vendetta," like "Lamb to the slaughter," starts off with a descriptive paragraph describing the setting off the story. "Cut in the cliff like a gigantic corridor." This is affective as it allows the reader to feel like they are almost there as they can picture where the story is set. The place where it is set is described as being cold and dull, it is a typical of a peasant place and sounds like a harsh environment. It is set just off Bonifacio. The story is about a woman called Saverini, who was the widow of Paolo. She lived in a house right on the edge of the cliff with her only son, Antoine and their dog Semillante. "A large, thin animal with long, shaggy hair, of the sheep-dog breed. The young man used her for hunting." Guy De Maupassant, use lots of descriptive words to help the reader imagine what things are like. From the descriptions he uses in the first few paragraphs, you can tell the Saverini loves her son and the place where she lives even if it is not in the most desirable of locations. ...read more.

"It'd be a favour to me if you'd eat it up." This is ambiguous as she says it as just a normal way of speaking, but really it will be a favour to her, as it would be destroying the evidence. Saverini is devious when she plans out her whole plan for revenge. She pays particular attention to detail for example; she gets dressed as a man, to avoid being caught. Both women mudded out of love. Mary murdered her husband because she loved him dearly and he had broken her heart when he had told her his news. The shock that she was about to loss the one person who she loved most, caused her to go to desperate measures, by letting out all of her rage and killing her husband. Saverini was also shocked, when she found out that her son was dead. She was so upset that she made a promised that she had to keep, to her son, to seek revenge. She loved her son so much, that she could do nothing but gain revenge on the person who had hurt him and ultimately hurt her. Both stories have an opening paragraph that consists of a good description of the place where the story takes place. This is affective as it makes the story seem more real. After I had studied both stories, "Lamb to the slaughter" by Roald Dahl and "Vendetta" by Guy De Maupassant. Out of the two stories, I preferred "Lamb to the slaughter." This was because it contained humour which helped to keep my attention and also because of the twist in which it had in its end. I also found it easier to associate with "Lamb to the slaughter" as it is a more modern story. Although "Vendetta" was a good story, I did not like it much as I found it dull and hard to associate with it. There wasn't as much suspense in "Vendetta" as there was in "Lamb to the slaughter." I feel that this made the story less interesting and so made me preferred "Lamb to the slaughter." ...read more.