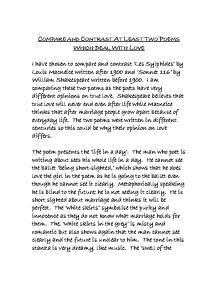 Compare and Contrast At Least Two Poems Which Deal With Love

COMPARE AND CONTRAST AT LEAST TWO POEMS WHICH DEAL WITH LOVE I have chosen to compare and contrast 'Les Sylphides' by Louis Macneice written after 1900 and 'Sonnet 116' by William Shakespeare written before 1900. I am comparing these two poems as the poets have very different opinions on true love. Shakespeare believes that true love will never end even after life while Macneice thinks that after marriage people grow apart because of everyday life. The two poems were written in different centuries so this could be why their opinion on love differs. The poem presents the 'life in a day'. The man who poet is writing about sees his whole life in a day. He cannot see the ballet 'being short-sighted,' which shows that he does love the girl in the poem as he is going to the ballet even though he cannot see it clearly. Metaphorically speaking he is blind to the future; he is not seeing it clearly. ...read more.

'To enter the lock and drop' is to stop and enter into marriage and drop down into reality. The next stanza is quick and sharp, no longer dreamy. They find that instead of bringing them closer together marriage brings them apart. They are separated by reality of everyday life. At the last stanza, the poem changes to the woman's point of view. All gets from her husband's breathing is comfort and it is sad all she has in her marriage is security. She thinks her life has passed by, 'the river had flowed away' and all her dreams are gone. The romance has disappeared and like the ballet, is no longer in their lives. Shakespeare begins the poem by saying he does not want to stand in the way of true love. He tells us that true love will not change when the things around us change: Love is not love which alters when it alteration finds, or bends with the remover to remove. No one is able to take it away from you if it is true love. ...read more.

This shows he believes very strongly in what he is saying in this poem. These poets' view of love differ greatly. Perhaps it is because they were written in different centuries and love was viewed differently because of lifestyle etc. Women before 1900 looked after the children and had to be content because they were regarded as second class citizens. They looked after their husbands and perhaps they were happier in their marriages. After 1900 women began working and after they got married they left their jobs and became unhappy with only taking care of their children and this could affect their marriage. 'Les Sylphides', which is written after 1900, has a pessimistic tone to it and is saying true love does not exist. Love ends with marriage and the reality of everyday life will separate a couple. In the end all we get from marriage is security. It seems that Macneice does not believe in Shakespeare's opinion of true love. Sonnet 116 has a more optimistic view on love. Shakespeare believes love to be never ending and true love will endure through anything life throws at you. He even believes that true love lasts beyond life. ...read more.