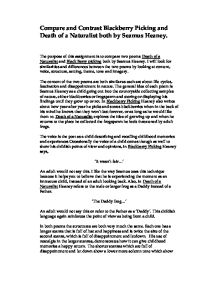 Compare and Contrast Blackberry Picking and Death of a Naturalist both by Seamus Heaney.

The purpose of this assignment is to compare two poems Death of a Naturalist and Black Berry picking both by Seamus Heaney. I will look for similarities and differences between the two poems by looking at content, voice, structure, setting, theme, tone and imagery.

The content of the two poems are both similar as each are about life cycles, fascination and disappointment in nature. The general idea of each poem is Seamus Heaney as a child going out into the countryside collecting samples of nature, either blackberries or frogspawn and storing or displaying his findings until they grow up or rot. In Blackberry Picking Heaney also writes about how year after year he picks and stores blackberries when in the back of his mind he knows that they won’t last forever, or as long as he would like them to. Death of a Naturalist explores the idea of growing up and when he returns to the place he collected the frogspawn he feels threatened by adult frogs.

The voice is the poet as a child describing and recalling childhood memories and experiences Occasionally the voice of a child comes though as well to show his childish points of view and opinions, in Blackberry Picking Heaney says,

An adult would not say this. I like the way Seamus uses this technique because it helps you to believe that he is experiencing the moment as an immature child, instead of an adult looking back. Also, in Death of a Naturalist Heaney refers to the male or larger frog as a Daddy instead of a Father.

An adult would not say this or refer to the Father as a ‘Daddy’. This childish language again reinforces the point of view as being from a child.

In both poems the structures are both very much the same. Each one has a longer stanza that is full of lust and happiness and is twice the size of the second stanza, which is full of disappointment and letdown.  His use of nostalgia in the larger stanzas, demonstrates how it can give childhood memories a happy return.  The shorter stanzas which are full of disappointment and let down show a lower more solemn tone which show the fact that he does not want to dwell on the negative part of the life cycle. Both poems have a break between the two stanza’s giving time to change the mood.

Another similarity is the setting. Blackberry picking is set in the countryside in co. Londonderry. We know they’re both in Londonderry because that is where Seamus Heaney grew up, and the poems are about him as a child. Death of naturalist is also set in the countryside although it also has references to his school and the flax dam. Whereas blackberry picking tells us he is walking round fields to find the ripe blackberries.

‘Round hayfields, cornfields and potato drills’

This gives the carefree image of the children involved in the poem walking round the countryside looking for the ripest blackberries that they can find.

The first theme that links the two poems together is nature and lifecycles in nature. Both talk about how everything comes to an end and dies or rots away. In Blackberry picking. Heaney tells us how he loved collecting ripe blackberries and just looking at them and their changing colours. Where as in Death of a naturalist he talks about frogs and their changing lifecycles from frogspawn, to tadpoles, to frogs and how the child feels threatened by this change. At the same time the child is growing up and learning more about life and growing up by beginning to question things instead of taking on board everything he is told, like a child does. Another similarity is letdown and disappointment. The title its self ‘Death of a naturalist’ could also signify a part of his own lifecycle and how his life cycle has ended. In the first stanza of each poem it is full of enthusiasm and optimism which contrasts with the second stanza, about disappointment and negativity. This tells us how nature isn’t what you expect it to be, it’s full of surprises, good and bad. The sub theme which is more hidden in the poems, mainly blackberry picking is religion and its connexion to nature. Deeper thinking leads us to believe it is telling us about the power of the universe contained in nature. It also hints at Christianity by giving references to Jesus Christ by using words like ‘blood, flesh, thorns and wine’ that are all things mentioned in the bible.

The tone in the two poems is very similar in the first, longer stanza of the two the tone is positive. In blackberry picking Heaney uses words like ‘Lust, sweet and glossy’ Death of a naturalist uses words like ‘nimble and delicately’ however in the second stanza of it poem it gives us a bitter feeling of death and disappointment. Death of a naturalist does this best by using words like ‘Rank, vengeance and sickened’ Black berry picking also uses powerful words like ‘fungus, glutting and sour’ This is effective because the poem is contrasting tones with the first stanza.

A clear link between poems is the effective use of imagery to communicate with the reader. Both poems contain positive imagery in stanza one because the mood is happy and uplifting. An example from blackberry picking is …

This works because it automatically makes you think of a blood clot. Picking up on its shape and colour. Stanza two gives us a lot of negative imagery and feeling. An example from death of a naturalist is …

This is effective because it makes you think of a strange object just sat there covered in mud, waiting to go off or attack. It also makes some people cringe at the fact there are frogs covered in a lot of mud.

Having analysed the two poems in great detail I have found that there are more similarities than differences. The only two differences I have found about the two poems is that death of a naturalist is set by a flux dam and inside a school when blackberry picking is set in late August and I have no proof other than the lifecycles but Death of a naturalist was probably set in spring but could have been any time of the year. The other was the surface difference, Death of a naturalist is about frogs life cycles and Black berry picking is more about childhood memories and how he used to enjoy picking blackberries just to look at and when they died and rotted away he was let down.