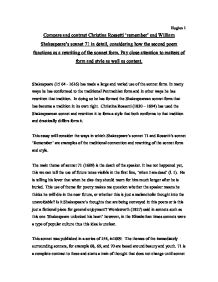 Compare and contrast Christina Rossetti 'remember' and William Shakespeare's sonnet 71 in detail, considering how the second poem functions as a rewriting of the sonnet form. Pay close attention to matters of form and style as well as content.

Hughes 1 Compare and contrast Christina Rossetti 'remember' and William Shakespeare's sonnet 71 in detail, considering how the second poem functions as a rewriting of the sonnet form. Pay close attention to matters of form and style as well as content. Shakespeare (15 64 - 1616) has made a large and varied use of the sonnet form. In many ways he has conformed to the traditional Pentrachian form and in other ways he has rewritten that tradition. In doing so he has formed the Shakespearean sonnet form that has become a tradition in its own right. Christina Rossetti (1830 - 1894) has used the Shakespearean sonnet and rewritten it to form a style that both conforms to that tradition and drastically differs form it. This essay will consider the ways in which Shakespeare's sonnet 71 and Rossetti's sonnet 'Remember' are examples of the traditional convention and rewriting of the sonnet form and style. The main theme of sonnet 71 (1609) is the death of the speaker. It has not happened yet, this we can tell the use of future tense visible in the first line, 'when I am dead' (l. ...read more.

4) and 'vilest worms' (l. 4) gives the vivid scenes of buried corpses. Onomatopoeic images like 'compounded with clay' (l. 10) I think gives an almost claustrophobic feeling of decomposing. He reinforces this rotting theme by the line 'love even with my love decay' (l. 12). This gives love a biodegradable slant, like the body that will decompose in the ground. In that case Hughes 3 this seems to suggest this love be no more than lust that will also fade with time. The fact that the speaker tells his lover not to mourn him longer 'than you shall hear the surly sullen bell' (l. 2) also seems to be pointing at the type of love in question. The sonnet form used in the series and 71 is the English or Shakespearean sonnet. In this sonnet Shakespeare sticks rigidly to the three quatrains and rhyming couplet structure. This form is an adaptation of the Pentrachan ideas and theme of the poetry and the Sicilian ABAB rhyming scheme. There is also an iambic pentameter being used rigidly until the 13 line in which there are 6 rather that 5 stresses. ...read more.

Like Shakespeare Rossetti uses dark and negative words like 'darkness and corruption' (l. 11) that I think give graphic ideas of bodily decomposing. The sonnet form used in this poem is a interesting and unique one. The beginning octave reflects the traditional Pentrachan form however the sestet seems to be loosely based more on the French rhyming scheme CCDEDE. The rhyming scheme that Rossetti has created; CDDECE manipulates the flow of the sonnet as to make the first line in the sestet the volta. She also uses Shakespeare's traditional Iambic pentameter and also gives the thirteenth line six stresses.3 This poem makes me feel sympathetic towards the speaker and her partner. This is because the general ideas of holding hands and talking about the future can be applied to anyone. This means it is very easy to identify with the problem of this couple. Hughes 5 These two sonnets are very good examples of a genre of poetry that has been actively modified since its invention and in doing so created new traditional styles. Rossetti and Shakespeare are two of the many who have taken the traditional and adapted it, as well as at the same time conforming and following the existing forms showing that the sonnet like all literary traditions is a fluid form to be manipulated and reworked as writers wish to express them. ...read more.