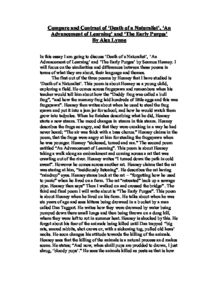 Compare and Contrast 'Death of a Naturalist', ' An Advancement of Learning' and ' The Early Purges'

Compare and Contrast of 'Death of a Naturalist', 'An Advancement of Learning' and 'The Early Purges' By Alex Lynne In this essay I am going to discuss 'Death of a Naturalist', 'An Advancement of Learning' and 'The Early Purges' by Seamus Heaney. I will focus on the similarities and differences between these poems in terms of what they are about, their language and themes. The first out of the three poems by Heaney that I have studied is 'Death of a Naturalist'. This poem is about Heaney as a young child, exploring a field. He comes across frogspawn and remembers when his teacher would tell him about how the "Daddy frog was called a bull frog", "and how the mammy frog laid hundreds of little eggs and this was frogspawn". Heaney then writes about when he used to steal the frog spawn and put it into a jam jar for school, and how he would watch them grow into tadpoles. When he finishes describing what he did, Heaney starts a new stanza. The mood changes in stanza in this stanza. Heaney describes the frogs as angry, and that they were croaking in a way he had never heard; "The air was thick with a bass chorus." ...read more.

In 'An Advancement of Learning', the characters are Heaney as a child again. Also the theme is overcoming a fear. Heaney experiences the situation in the poem as yet again scary. As he bumps in to a rat he runs in fear but he confronts another making the situation worse for Heaney, however Heaney tries to be brave and face his fear and does so as the rat ran away before he did. In 'The Early Purges', the characters are Dan Taggart and Heaney as a child. Dan is older than Heaney, most likely an adult and his job was to kill the 'pests' on the farm such as unwanted kittens. The theme of this poem is the killing of un- needed animals or unwanted animals on a farm and forgetting about the guilt of the killing and a young age. Heaney first experiences the killing at a young age and develops a fear of the animals being drowned but he soon forgets about it and shrugs it off when he convinces himself its natural. In this paragraph I will discuss the language, tone and style of each poem. In each poem I will talk about the usage of alliteration, war phrases, personification, similes, metaphors, use of senses and onomatopoeias. ...read more.

In 'An Advancement of Learning', the tone starts off calmly but when the first rat appears, the beat of the poem gets faster to convey Heaney is scared. In 'The Early Purges' the tone starts off slowly and downbeat and that tone carries through the rest of the poem. In conclusion, the main similarities between the three poems are in the language used. By this I mean that of particular phrases such as war words and the usage of similes and alliteration and the fact that they are all about animals and fear. The main differences are that "The Early Purges" is a different structure to the other two poems. I have learnt about parts of Seamus Heaney's childhood and his coping with fear. I have also learnt different techniques to use in poems, for example alliteration. I have enjoyed the excitement Heaney builds up in each poem. My favourite poem is "An Advancement of Learning" because I can understand and picture everything Heaney describes. Also it is my most preferred poem due to the fact I can relate to confronting a fear and not having a path to turn to and then the fear swam away from me, so I can relate to the story. ...read more.