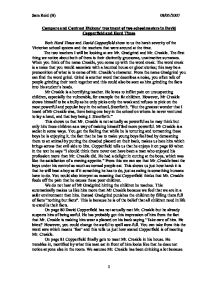 Compare and Contrast Dickens' treatment of two schoolmasters in David Copperfield and Hard Times Both Hard Times and David Copperfield show to us the harsh severity of the Victorian school system and the teachers that were around at the time. The two teachers I will be looking at are Mr. Gradgrind and Mr. Creakle. The first thing we notice about both of them is their distinctly gruesome, unattractive surnames. When you think of the name Creakle, you come up with the word creak. The word creak is a noise that you would associate with a haunted house or ghost stories; this may be a premonition of what is to come of Mr. Creakle's character. From the name Gradgrind you can find the word grind. Grind is another word that describes a noise, you often talk of people grinding their teeth together and this could also be seen as him grinding the facts into his student's heads. Mr Creakle is a horrifying teacher. He loves to inflict pain on unsuspecting children, especially the vulnerable, for example the fat children. However, Mr Creakle shows himself to be a bully as he only picks only the weak and refuses to pick on the most powerful and popular boy in the school, Steerforth. ...read more.

You also see what a figure of authority he is when he agrees to look after Copperfield's money and offers to sell him treats and other luxuries. A difference between the two teachers is the fact that Mr. Gradgrind is actually trying to teach the children something, although what he is teaching them is plain and boring. We do not hear of Mr. Creakle teaching the boys anything but what a horrible man he is. Mr Gradgrind's teaching methods are so very dry and unimaginative. He shows no colour in what he teaches, he addresses his pupils as numbers and will only teach facts and not go over the border and teach what is not necessary. On page 16 we see the effect that Gradgrind's teaching has had on the children he teaches. None of them know of anything that is not fact, they don't know about the 'cow that swallowed Tom Thumb' for example they only know about the cow that has four legs and eats grass. Seeing this we realise that Mr. Gradgrind is denying these children their childhood's in a way by not letting them venture out and discover all of their childhood tales that most children would have heard. ...read more.

However, unluckily for him there is his own daughter Louisa, who he reprimands and takes away from the distraction saying what if her friends had seen her. There is one major difference between these two men and that is that Mr. Gradgrind is actually trying to teach the children, whereas Mr Creakle is only submitting them to corporal punishment which they often don't deserve. Another great difference is the picture that you form of the two men. When you think of Mr Creakle you picture a weak drunkard whose only point in life is to hurt poor, defenceless children who have no chance of defending themselves. When you think of Mr. Gradgrind then you think of a man who is determined to teach children facts and nothing but facts. You do not think of the harsh man that Mr. Creakle is. However, they are very similar in the way that they teach in the same environment as each other. They both have dull, lifeless classrooms and have very grey personalities. They are also both similar in the ways that they do not care about the feelings of the children. Mr Creakle focuses on breaking them down using pain, while Mr Gradgrind will forget names and verbally abuse children often telling them what they say is complete rubbish. Sam Reid ?? ?? ?? ?? Sam Reid (B) 08/05/2007 I ...read more.