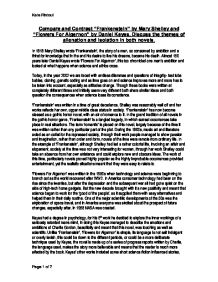 Compare and Contrast &quot;Frankenstein&quot; by Mary Shelley and &quot;Flowers For Algernon&quot; by Daniel Keyes, Discuss the themes of alienation and isolation in both novels.

Compare and Contrast "Frankenstein" by Mary Shelley and "Flowers For Algernon" by Daniel Keyes, Discuss the themes of alienation and isolation in both novels. In 1818 Mary Shelley wrote 'Frankenstein', the story of a man, so consumed by ambition and a thirst for knowledge that in the end his desire to live his dreams, became his death. Almost 150 years later Daniel Keyes wrote 'Flowers For Algernon', this too chronicled one man's ambition and looked at what happens when science and ethics cross. Today, in the year 2002 we are faced with endless dilemmas and questions of integrity- test tube babies, cloning, genetic coding and as time goes on and science improves more and more has to be taken into account, especially as attitudes change. Though these books were written at completely different times and initially seem very different both share similar ideas and both question the consequences when science loses its conscience. 'Frankenstein' was written in a time of great decadence, Shelley was reasonably well off and her works reflects her own, upper middle class status in society. 'Frankenstein' has now become classed as a gothic horror novel, with an air of romance to it. In the grand tradition of all novels in the gothic horror genre, 'Frankenstein' is a tangled tragedy, in which surreal occurrences take place in real situations. The term 'romantic' is placed on this novel, largely because of the time it was written rather than any particular part of the plot. During the 1800s, music art and literature acted as an outlet for the repressed society, through their work people managed to show passion and imagination, rather than order and form, novels of the time were remote from ordinary life. In the example of 'Frankenstein', although Shelley had led a rather colorful life, involving an affair and elopement, society at the time was not very interesting for women, through her work Shelley could take an absence from her own existence and could explore new and obscure ideas. ...read more.

Both Shelley's and Keyes' work reflects this view and show that when science gains too much power the consequences cannot be foreseen and can end tragically. However, as someone who is interested in psychology, Keyes shows that as humans we are likely to suffer in the present because out subconscious won't let us forget our past. In the long term, we could blame Charlie's suffering on his mother. Rose (Charlie's mother) pushed him hard and over the years managed to erase any sense of self worth Charlie may have had, especially after his sister, Norma was born. These memories and past feelings stay with Charlie and mean that he suffers greatly and it seems fair to say that in the end Charlie's mind causes him the most pain as reminds him of his past. Strauss and Nemur did not create the suffering; they merely created a portal for Charlie to voice his anger and pain through. Throughout the book Charlie is compared to the lab mouse, Algernon, who has also undergone brain surgery to raise his intelligence, he is seen as a 'special' case as he has had a stable level of intelligence for the longest time, unlike the other case studies. When Charlie first started the treatment, one of his tasks was to race Algernon in solving a maze problem, these tests came to an end when Charlie became much more intelligent than the mouse, but Charlie continues to look for similarities he shares with Algernon. Because Algernon had the operation earlier than Charlie, it is possible for Charlie to look at the long term affects of the surgery, but when Algernon starts to deteriorate and become restless, Charlie realises what the future has in store for him. One of the major similarities between Charlie and Algernon is that they both lived before the treatment, but in a way led a half-life, where they were not fully aware of their surroundings and we held back, Charlie by prejudice and Algernon by physical bars of a cage. ...read more.

Although the settings of the novels differ greatly, it is clear that both authors used a similar technique in setting the scene. In Shelley's time the most hostile environment was the countryside it was isolated, much of 'Frankenstein' is set in the great mountains of the North, or in the dramatic and highly dangerous parts of the North Pole. These settings add a sense of drama to the text as well as reflecting the theme of isolation dramatic settings were also typical of romantic, literature, for example Bram Stokers 'Dracula' takes place in the harsh parts of Russia. Keyes takes a modern approach to creating a scene, he chose New York, a famous city, filled with people, he shows that even when surrounded by others it is still possible to feel alienated and face hostility. For Charlie the bustling streets are overwhelming and unwelcoming, to the monster the harsh landscapes mean that he suffers greatly and remains alone. Though the writers differ greatly, and come from completely different times, both seem to share a common interest analyzing people and society as a whole. Both writers looked at the psychology behind science and scientists themselves, both also explore the philosophical questions that science poses. I think that both writers wanted their work to reflect their own views that it is not acceptable for scientists to 'play God' and to intervene with human nature. Both texts also remind the reader about the psychology of our culture and remind us of the social stigma that surrounds both intelligence and appearance. The stories of these men are extremely interesting and raise important issues about science and human nature. Even thought they are written years apart, at completely different stages of scientific development, both writers successfully warn against taking science to far and convey the idea that science without conscience can only end tragically. Kate Rintoul Page 1 of 7 ...read more.