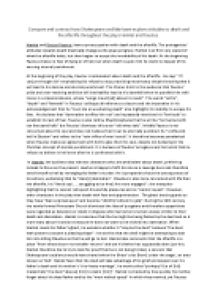 Compare and contrast how Shakespeare and Marlowe explore attitudes to death and the afterlife throughout the plays Hamlet and Faustus.

﻿Compare and contrast how Shakespeare and Marlowe explore attitudes to death and the afterlife throughout the plays Hamlet and Faustus. Hamlet and Doctor Faustus have a preoccupation with death and the afterlife. The protagonists' attitudes towards death drastically change as the plays progress. Hamlet is at first very scared of what the afterlife holds, but then begins to accept the inevitability of his death. At the beginning Faustus shows no fear of dying or of h**l, but when death is upon him he starts to despair of his ensuing eternal punishment. At the beginning of the play, Faustus is ambivalent about death and the afterlife. He says " I'll conjure though die" emphasising his refusal to stop practising necromancy despite knowing that it will lead to his demise and eternal punishment. The Chorus hints to the audience that Faustus' pride and over-reaching ambition will inevitability lead to his downfall when he parallels him with Icarus in a classical allusion, whose "wings mount[ed] above his reach". The words "settle", "depth" and "farewell" in Faustus' soliloquy all reference a closure and the imperative in his acknowledgement that he "must die an everlasting death" also highlights his inability to escape his fate. He declares that "damnation terrifies him not" and repeatedly mentions his "fortitude" to establish his lack of fear. Faustus is also told by Mephistopheles that he will be "tormented with ten thousand hells" but Faustus' dismisses this as an "old wives tale". ...read more.

Mephistopheles tells Faustus that h**l is a mental state because when we sin we reject god and are "deprived of everlasting bliss". Hamlet similarly tells Gertrude that h**l is within her as it "canst mutine in a matron's bones", suggesting that it runs riot in her body. When Faustus starts to sign the deed of gift to Mephistopheles his "blood congeals" , his body reacting physically as a warning against giving up his soul and suffering eternal punishment. Both plays show that people's actions determine whether they go to heaven or h**l. Hamlet uses the metaphor of an "audit" to suggest that we have an account which will prove to God whether we deserve a place in heaven. Hamlet believes that at any time one can repent and therefore ensure salvation. He tells his mother that she can "either [lodge] or throw the devil out". and he states that "the readiness is all", explaining that being prepared for death makes it bearable unlike his father who was "full of bread" illustrating that he did not have time to repent his sins. Hamlet knows that if he does carry out the revenge killing of Claudius that he could be damned. From the beginning of the play, Faustus believes that he is damned and will be punished in h**l whatever he does. Faustus misinterprets scriptures so that he can prove himself right about the injustice of God. He says that "the wages of death is sin" but leaves out the rest of the passage which says that "the gift of God is eternal life, though Jesus Christ our Lord". ...read more.

However in contrast Faustus finally acknowledges his hellish future and so becomes terrified of dying. A part of Faustus' contract allows him to choose the date of his death and the inevitability causes him even greater despair . Faustus refuses to go easily to his death, he instead will have to be "fetched" by the devil. He is in deep despair, frantically worrying about the consequences of his deal and his fragmented speech indicates his distressed mental state. Faustus tries to delay his death in his final soliloquy, yet the pace and rhythm created by his monosyllabic words and repetition ironically hurry his death along. The chiming of the clock heightens the drama and is a stark reminder of that time cannot be stopped and the unstoppable nature of death. Similarly, when Hamlet is dying, he refers to death as a "sergeant" who is "strict in his arrest". The metaphor highlighting that death holds authority and it cannot be stopped. Both protagonists' attitudes towards death and the afterlife remarkably change during the plays. Hamlet starts off with a fear of the unknown afterlife but becomes far more accepting of death and the role that he will have to partake in order to exact revenge which could lead to his damnation. Faustus initially does not care about the terrors of h**l and so makes a pact with the devil. However due to the surrender of his soul, Faustus later begins to greatly fear the horrors that await him after his death. The two plays are centred around deaths and the two characters obsession with it. ...read more.