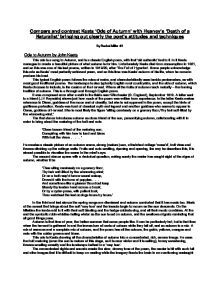 Compare and contrast Keats 'Ode of Autumn' with Heaney's 'Death of a Naturalist' bringing out clearly the poet's attitudes and techniques By Rachel Miller 4H Ode to Autumn by John Keats This ode is a song to Autumn, and is a classic English poem, with that 'old authentic' feel to it. In it Keats manages to create a beautiful picture of what autumn is for him. Unfortunately Keats died from consumption in 1821, and so this was one of his last poems, written in 1819/20, after 'The Fall of Hyperion'. Some people acknowledge this ode as Keats' most perfectly achieved poem, and so this time was Keats' autumn of his life, when he came to produce his best. This typical English poem follows the rules of metre, and characteristically uses Iambic pentameters, as with most good traditional poems. The landscape is also typically English rural countryside, and the side of autumn, which Keats chooses to include, is the custom of the Harvest. Where all the fruits of autumn reach maturity - the farming tradition of autumn. This is a through and through English poem. It was composed soon after a walk in the fields near Winchester (S. England), September 1819. A letter sent to a friend (J.H Reynolds) shows just how much of the poem was written from experience. In the letter Keats makes reference to Diana, goddess of the moon and of chastity, but she is not apparent in the poem, except the hints of godliness perfection. Keats was fond of classical myth and legend and another goddess who seems to appear is Ceres, goddess of Harvest. She is most likely the figure 'sitting carelessly on a granary floor,/Thy hair soft-lifted by the winnowing wind;' The first stanza introduces autumn as close friend of the sun, personifying autumn, collaborating with it in order to bring about the maturing of the fruit and nuts 'Close bosom friend of the maturing sun; Conspiring with him how to load and bless With fruit the vines . ...read more.

You could tell the weather by frogs too For they were yellow in the sun and brown In rain.' Some of it is useful, but most it useless, but nonetheless classic child information, which accentuates just how much of a protected world he lives in. In stanza two it is possible to tell right away that something is about to happen by the first line, 'Then one hot day', which changes the atmosphere of the poem to one of expectation. The first words to signify an attack are 'the angry frogs / Invaded the flax-dam'. He thinks that the frogs are angry because he has stolen their eggs and so interprets the frog's actions of that of a hostile attack. So the imagery described by the child supports the feeling that an attack is imminent - 'coarse croaking that I had not heard / Before', 'gross-bellied frogs were cocked', 'their loose necks pulsed like sails' and 'Poised like mud grenades'. However the reader should know that it is an innocent situation, that frogs return to the same water every year. The child feels sickened by the images and so comes the shortest sentence 'I sickened, turned, and ran.' The child experiences new feelings, in contrast to the first stanza where the flax-dam was a comfort it now fills the child with terror at this side of nature. Then the child flees from the nightmarish visions he has conjured up: ' . . . The great slime kings Were gathered there for vengeance and I knew That if I dipped my hand the spawn would clutch it.' The child has to deal with these new emotions, the most immediate one being fear, and finds the urge to run. It is a new world for him, unknown, and he is no longer protected from it. In this poem Heaney has four different angles at which the poem is put together: adult Heaney as a realist, nature's lessons, his childhood perspective and stripping everything to down to basics. ...read more.

He is looking for answers because we only ever see part of the story (like in the poem, we only ever see the story from the child's point of view), because we don't know everything. We have to grow and learn from our experiences, and this is Heaney's experience, and there is a change in the child from being a child emotionally and being protected from things like that, and being an adult, as he grows and learns. Heaney allows us to feel and see the full force of nature, the horror, and see that we cannot control it, but that the decay can. The decay equals the change in nature, and is a metaphor for the change in the child. We are part of nature and while we are not controlled by the change caused by decay what we see and feel and thus learn from changes us. Keats' nature is a divine force, nothing, not even decay can change it for Keats. The power of this poem is supposed to bring alive for us autumn as Keats sees it. That's what Romanticism is about, turning something that an ordinary person would see as perhaps disgusting, into something beautiful and wonderful. For Keats art cures everything, it didn't matter that he was dying of tuberculosis but it did matter that he wrote this poem. I think Heaney is trying to show that maybe we are taught to see things by society, and nature is the untamed truth e.g. the child is taught at school about the frogspawn but not how it is made, not mentioning the sexual reproduction involved. Nature is a better teacher than man, it teaches about that, it teaches about recycling in the decay. It is not enough for Heaney to just watch nature like Keats does. He must be involved in nature. He gets his wellington boots out and gets stuck in. This most likely comes from having lived on a farm, and having all the experiences he did. Keats' poem came from his ultimately dreamy heart, forever impractical on looking at things as they are. ...read more.