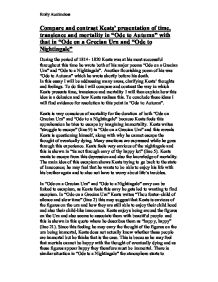 Compare and contrast Keats' presentation of time, transience and mortality in "Ode to Autumn" with that in "Ode on a Grecian Urn and "Ode to Nightingale" During the period of 1814- 1820 Keats was at his most successful throughout this time he wrote both of his major poems "Ode on a Grecian Urn" and "Ode to a Nightingale". Another flourishing poem of his was "Ode to Autumn" which he wrote shortly before his death. In this essay I will be addressing many areas, clarifying Keats' thoughts and feelings. To do this I will compare and contrast the way in which Keats presents time, transience and mortality I will then explain how this idea is a delusion and how Keats realises this. To conclude these ideas I will find evidence for resolution to this point in "Ode to Autumn". Keats is very conscious of mortality for the duration of both "Ode on Grecian Urn" and "Ode to a Nightingale" because Keats feels this apprehension he tries to escape by imagining immortality. Keats writes "struggle to escape" (line 9) in "Ode on a Grecian Urn" and this reveals Keats is questioning himself, along with why he cannot escape the thought of eventually dying. Many emotions are expressed while he goes through this experience. Keats feels very envious of the nightingale and this is shown in "tis not through envy of thy happy lot" (line 5). Keats wants to escape from this depression and also the knowledge of mortality. ...read more.

Keats then goes on to say "Save what from heaven is with the breezes blown" (line 39) this is useful as it the image describes light filtering through leaves moved by the wind. The effect that this has is to show that Keats is feeling that death and the thought of eventually dying is draining all the good things out of life. In the other poem "Ode on a Grecian Urn" Keats writes "beneath the trees, thou canst leave" this shows imagery of forever young, the way in which Keats is trying to become immortal. In "Ode to Autumn" Keats has realised that he no longer needs to imagine being immortal and he has become cognizant of the meanings and reason of life. He has given up the quest to escape the human world. Time passing and transience also play a major part in these poems. In "Ode to a Nightingale", Keats uses the nightingale to escape. He feels as though he wants to get away at the start of the poem, "and with thee fade away into the forest dim" (line 20) therefore this quote depicts this point well. As the poem progresses Keats starts to realise he cannot escape reality, this point I have already covered earlier in the poem. In "Ode on a Grecian Urn", Keats is in a fantasy for example "Fair youth beneath trees, thou canst not leave" (line 15). He is letting his emotions 'run free' and this is why he has become surrounded by this fantasy. ...read more.

Punctuation also helps add to the effect of time on Keats' life. In "Ode on a Grecian Urn" Keats uses exclamation marks to create suspense when talking about the figures on the urn. Capital letters are added in the middle of sentences in "Ode to a Nightingale" for example "Where Beauty cannot keep her lustrous eyes," therefore this is to make the feeling of envy towards the nightingale seem even more stronger than we first saw. The use of these words and punctuation builds up ecstatic time, the construction of these poems seems to suggest the structure of Keats' life. In "Ode to Autumn" there is a very different structure to the first two poems. In the first stanza Keats makes it in to one whole sentence and has crammed lots of information into this sentence which reflects that he wants to live his life to the full. He tries to use sentence structure to low down time. Words with hard consonant sounds such as 's', 'm' and 'n' all add to the structure. In the third and final poem "Ode to Autumn" Keats feels that he has found his ultimate resolution and he also feels that he has challenged himself enough to have managed to forget about his mistakes. He compensates himself by saying autumn "hast thy music too" (line 24). He has given up his quest to escape and given up emptiness and ecstasy over happiness. Keats instead searches for resolution, acceptance and contentment. Throughout all of Keats' experiences he has come to terms with life and how to handle problems, he can now enjoy life to the full and not have to worry about eventually dying. Emily Auchincloss ...read more.