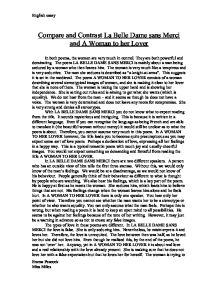 Compare and Contrast La Belle Dame sans Merci and A Woman to her Lover In both poems, the women are very much in control. They are both powerful and dominating. The poem LA BELLE DAME SANS MERCI is mainly about a man being seduced by a woman who then leaves him. The woman is very much like a temptress and is very seductive. The man she seduces is described as "a knight-at-arms". This suggests it is set in the medieval. The poem A WOMAN TO HER LOVER consists of a woman describing several stereotypical images of women, and she is making it clear to her lover that she is none of them. The woman is taking the upper hand and is showing her independence. She is setting out rules and is aiming to get what she wants (which is equality). We do not hear from the man - and it seems as though he does not have a voice. The woman is very determined and does not leave any room for compromise. She is very strong and denies all stereotypes. With LA BELLE DAME SANS MERCI you do not know what to expect reading from the title. ...read more.

We can begin to tell that the woman is not a typical lady of that time. "Hair was long/eyes were wild" women were usually thought of as unearthly and wild if they wore their hair done. He begins to misinterpret her feelings for him "look'd at me as she did love". The meaning of the look was ambiguous, you cannot be sure if it was meant with love. A biblical idea was also introduced "manna dew". Manna is a heavenly food as it was supposedly sent to the Israelites from God when they were in the desert. "In language strange she said - I love thee true". As it was in a language he could not understand, again it could have been misunderstood. "Elfin grot" this is also like part of a fairytale. At this point they are in her cave or grotto. It gives an impression of seduction - "full sore" this can be interpreted as passion. The repetition is again shown with "kisses four". "She lulled me to sleep" this shows that the woman is in control. The final three stanzas tell us about previous lovers of the woman who had all been victims to her seduction. ...read more.

As it tells a story, there is not much change in the idea throughout the poem. There are certain clues to tell us that it is set in medieval times. Some of the language and terms used set this scene. The poem A WOMAN TO HER LOVER does not have any particular rhyme scheme. As the woman is setting out rules, it sets a scene for rhythm. You can get into the poem quite well and can relate to the stereotypical ideas introduced. Each stanza has a drastic change of idea. The first three stanzas are stereotypes of women but the fourth stanza is her dream of the relationship, as she dismisses all stereotypes. She also subverts and undermines the traditional stereotype of a nineteenth century woman. Both of the poems have very similar ideas introduced, such as circles and biblical images. I enjoyed reading both poems, as women were the stronger sex. However, I preferred the idea of women being their own person and not any particular stereotype. Women can be seductive but they are always themselves. I also preferred the layout and structure of A WOMAN TO HER LOVER as LA BELLE DAME SANS MERCI was slightly too long. The language used was also easier to understand and interpret in A WOMAN TO HER LOVER. However, they were both very good poems. ?? ?? ?? ?? English essay Emma Peacock Miss Miles ...read more.