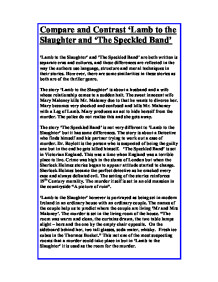 Compare and Contrast 'Lamb to the Slaughter and 'The Speckled Band'

His motive for trying to kill Miss Helen Stoner was over money. His deceased wife left money for her daughters, but if they die he would receive the money. Dr. Roylott is portrayed as a usual 19th Century villain, evil, short tempered, and devious. In a lot of Victorian detective stories the villain is represented the same way as Dr. Roylott in Sir Arthur Conan Doyle's story. Dr. Roylott is shown to look very evil very much in his face "his high, thin, fleshless nose, gave him somewhat the resemblance to a fierce old bird of prey". The victim in 'Lamb to the Slaughter' is Patrick Maloney. He was married to Mary Maloney. He was killed when Mary Maloney hit him over the head with a leg of lamb. We do not know a lot about Patrick only that we know that he works at the local Police station. In the 'Speckled Band' the victim is Miss Helen Stoner. When we first see her in the story she was wearing black, veiled and grey haired. She was shivering and terrified "we could see that she was indeed in a pitiable state of agitation, her face all drawn and grey, with a restless frightened eyes, like of those of some hunted animal", "the lady gave a violent start", "It is fear, Mr Holmes. ...read more.