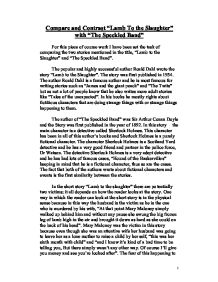 Compare and Contrast "Lamb To the Slaughter" with "The Speckled Band" For this piece of course work I have been set the task of comparing the two stories mentioned in the title, "Lamb to the Slaughter" and "The Speckled Band". The popular and highly successful author Roald Dahl wrote the story "Lamb to the Slaughter". The story was first published in 1954. The author Roald Dahl is a famous author and he is most famous for writing stories such as "James and the giant peach" and "The Twits" but as not a lot of people know that he also writes more adult stories like "Tales of the unexpected". In his books he mostly rights about fictitious characters that are doing strange things with or strange things happening to them. The author of "The Speckled Band" was Sir Arthur Conan Doyle and the Story was first published in the year of 1892. In this story the main character is a detective called Sherlock Holmes. This character has been in all of this author's books and Sherlock Holmes is a purely fictional character. The character Sherlock Holmes is a Scotland Yard detective and he has a very good friend and partner in the police force, Dr Watson. The detective Sherlock Holmes is a very adept detective and he has had lots of famous cases, "Hound of the Baskervilles" keeping in mind that he is a fictional character, thus so are the cases. The fact that both of the authors wrote about fictional characters and events is the first similarity between the stories. In the short story "Lamb to the slaughter" there are potentially two victims; it all depends on how the reader looks at the story. One way in which the reader can look at the short story is in the physical sense because in this way the husband is the victim as he is the one who is murdered by his wife, "At that point Mary Maloney simply walked up behind him and without ...read more.

The reader is given a perception of a warm and homely atmosphere where a loving wife waits attentively for her husband. This perception changes when the husband's plans become clear to the reader. He tells her of how he going to leave her and the warm feeling disappear to be replaced by those of shock, pity and a sense of the husband getting just what he deserves. This is akin to the way the reader is made to feel in the narrative 'The Speckled Band' about Dr Roylott. The narrative "The Speckled Band" has an extremely diverse setting from the one that was created in "Lamb to the Slaughter". The main places that all of the incidents take place are in the manor house of Stoke Moran. The setting of this house is supposed to give the reader get a sense of apprehension and the feeling that an important event will take place there. The key things that do this are, the shape of the old house "a high central portion, and two curving wings like the claws of a crab". The comparison to a crab creates a feeling that the house is alive which is a popular theme in many a horror story also the crab does not have very positive connotations because they are seen as being angry snapping creatures. Also you are told that "the windows were broken, blocked with wooden boards" this quote creates a sense of foreboding danger and that the house is somewhat unsafe. We are also told that there is a Baboon and Cheetah stalking around the grounds, "and he has at this moment a cheetah and a baboon which wonder liberally over his grounds". This can be seen as a red herring because once the reader finds this out he/she is led to believe that these creatures have something to do with the deaths in the tale. ...read more.

For example, it uses the words "Intimate friend" in those time these words did not have a lot of bad connotations however in modern times it has very strong connotations and it also uses the word "e*********n" this words also has bad connotations in the modern era. You can also tell that it is set in Victorian times because there are still manor houses and cars like dog carts and this is only individual to this time. There are also ways in which you can tell that "Lamb to the Slaughter" is set in the 1950's because the houses that they live in are modern and typical to that time. Also you can tell that there is a big time difference because in "The Speckled Band" when there is trouble she can only go to one person whereas in "Lamb to the Slaughter" when there is trouble an entire police squad came round to help. In both of the stories there are no female detectives. This does not surprise me because they have never been many females in the police force and even today there are many more men than women in the police force. After looking at the two stories I have decided that I like the "The Speckled Band" the most. This is because there are many more exciting moments that kept me interested throughout the whole story. Another reason I liked it was because I enjoyed working out clues and slowly solving the crime and the desire to know whether or not I was successful in my deductions. I believe that people will always like to be confused and astounded that is why magic will always be so popular. For all of these reasons people will always want to read a good mystery and the need we have to try to work things out so as not to feel fooled also, our curiosity of wanting to know if we were right, and if not, how it was done. By Wezley Siddons 1 ...read more.