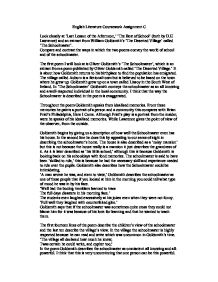 Compare and contrast 'Last Lesson of the Afternoon,' 'The Best of School' (both by D.H Lawrence) and an extract from William Goldsmith's 'The Deserted Village' called 'The Schoolmaster'.

English Literature Coursework Assignment C Look closely at 'Last Lesson of the Afternoon,' 'The Best of School' (both by D.H Lawrence) and an extract from William Goldsmith's 'The Deserted Village' called 'The Schoolmaster'. Compare and contrast the ways in which the two poems convey the world of school and of the schoolmaster. The first poem I will look at is Oliver Goldsmith's 'The Schoolmaster', which is an extract from a poem published by Oliver Goldsmith called 'The Deserted Village.' It is about how Goldsmith returns to his birthplace to find the population has emigrated. The village called Auburn is a fictional town but is believed to be based on the town where he grew up. Goldsmith grew up on a town called Lissoy in the South West of Ireland. In 'The Schoolmaster' Goldsmith conveys the schoolmaster as an all knowing and a well-respected individual in the local community. I think that the way the Schoolmaster is described in the poem is exaggerated. Throughout the poem Goldsmith speaks from idealised memories. From these memories he paints a portrait of a person and a community this compares with Brian Friel's Philadelphia, Here I Come. Although Friel's play is a portrait from the insider, were he speaks of his idealised memories. While Lawrence gives the point of view of the observer, from the outside. ...read more.

'While words of learned length and thundering sound Amazed the gazing rustics ranged around.' Alliteration in above two lines lengthens the words, which is effective. Throughout the poem Goldsmith uses a chatty tone to get the reader on his side this works well throughout the poem. The next two poems I studied were 'Last Lesson of the Afternoon' and 'The Best of School by D.H. Lawrence. They are two contrasting poems from his book 'The Schoolmaster.' 'Last Lesson of the Afternoon' is about Lawrence's struggle as the schoolmaster against his pupils. The poem has a bitter and disillusioned tone. It contrasts with William Goldsmith's poem 'The Schoolmaster' which describes the schoolmaster as being respected by all the pupils. While D.H. Lawrence has given up on trying to teach the pupils in this poem. In the poem he describes the debate he has in his mind while waiting for the bell to ring. In the first verse he is physically shattered and urging the bell to ring. 'When will the bell ring, and end this weariness.' In the first verse he uses an extended hunting metaphor when describing the students. 'How long have they tugged on the leash ... I can haul them and urge them no more.' Lawrence has little energy left and wants to keep what energy he has to himself. ...read more.

This shows the contrasting moods Lawrence experiences in both poems and the feelings he has towards his students. In 'Last Lesson of the Afternoon' Lawrence talks about his determination to save his energy. Now in 'The Best of School' he talks of the students determination with their work. The poem compares with 'The Schoolmaster because it shows that the students respect the schoolmaster. Every so often they just have to look up at him for reassurance. 'And then he turns again, with a little, glad Thrill of his work when he turns again from me' I feel that this is exaggerated and very unrealistic. I think that it is exaggerated that a student just has to look at him to find the answer to his question. In this poem it is as if they all depend on each other to live. It is a symbiotic existence. 'That they cleave unto, and up which they climb Up to their lives-so they to me' The students are developing into adulthood and he is helping them on their way with an education. Of the three poems 'Last Lesson of the afternoon' is my favourite because it is the one I can identify most with and is more realistic compared to the other two poems. I think that 'The Best of School' and 'The Schoolmaster' are unrealistic and very exaggerated. ...read more.