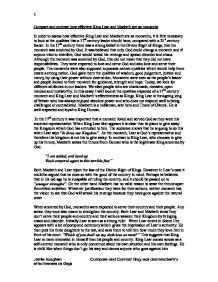 Compare and contrast Lear and Macbeth's effectiveness as Kings.

Compare and contrast how effective King Lear and Macbeth are as monarchs In order to assess how effective King Lear and Macbeth are as monarchs, it is first necessary to look at the qualities that a 17th century leader should have, compared with a 21st century leader. In the 17th century there was a strong belief in the Divine Right of Kings, that the monarch was anointed by God. It was believed that only God could change a monarch and if anyone tried to interfere, God would wreak his revenge and spread disorder and chaos. Although the monarch was anointed by God, this did not mean that they did not have responsibilities. They were expected to love and serve God and also love and serve their people. The monarchs were also supposed to possess certain qualities which would help them create a strong nation. God gave them the qualities of wisdom, good judgement, justice and mercy, by using their power without destruction. Monarchs were seen as the people's leader and people looked to their monarch for guidance, strength and hope. Today, we look for different attributes in our leaders. We elect people who are charismatic, decisive, open minded and trustworthy. ...read more.

However he is not wise enough to see that he is being manipulated by Lady Macbeth. "And live a coward, in thine own esteem" Macbeth has proved in battle and to the King that he is not a coward, and has been rewarded for his loyalty and bravery. Yet he allows himself to be persuaded to murder Duncan, even though his instinct tells him it is wrong because Lady Macbeth challenges his masculinity. Lear is also manipulated and lied to by women. Gonerill and Regan persuade him to give them half his Kingdom, pretending they love him and him alone, even though they are married. In her declaration Regan says; "I profess Myself an enemy to all other joys." Lear is unwise to the fact that both Gonerill and Regan are deceiving him in order to inherit the Kingdom. He fails to see that he cannot keep the name of King and give away his Kingdom. A leader should be able to recognise when he is being lied to, but he is too blinded by flattery to realise. However is it unrealistic for a father to expect loyalty from his three daughters? As a father, it would be unnatural to question the promises made by Gonerill and Regan. ...read more.

From here we see Macbeth slowly become mad with power and he goes back to the witches for advice. By going back to the witches, not only does he go to God's enemy for advice thus failing to love and serve God, but he also displays a total lack of wisdom. At this point in the play, the audience believe Macbeth has allowed himself to get so immersed in evil that it is impossible for him to have any kind of positive effect on his people or country. However, at the very end of the extract, I feel respect for Macbeth. Even after every hope had been lost, he continued to fight and died defending his people and country. Despite losing his mind, Macbeth still shows bravery, loyalty and love of his country and people. Macbeth is a survivor who did what was necessary to defend his Kingdom. King Lear and Macbeth are two very interesting and unpredictable characters who change a great deal throughout the two plays. Ultimately we have to consider who is the more effective monarch. Is it Lear, alone, bitter, blaming everyone around him for his mistakes and blinded by anger and revenge or Macbeth, who died in battle to protect his Kingdom? ?? ?? ?? ?? 3 Jamie Boughen Compare and Contrast King Lear and Macbeth's effectiveness as Kings ...read more.