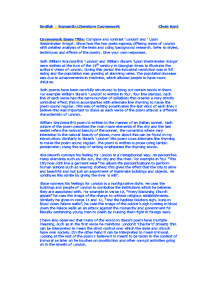 Compare and contrast 'London' and ' Upon Westminster Bridge'. Show how the two poets express differing views of London with detailed analysis of the texts and using background research

English + Romantic Literature Coursework Clyde Kent Coursework Essay Title: Compare and contrast 'London' and ' Upon Westminster Bridge'. Show how the two poets express differing views of London with detailed analysis of the texts and using background research. Refer to styles, techniques and effects of the poetry. Give your own responses. Both William Wordworth's 'London' and William Blake's 'Upon Westminster Bridge' were written at the turn of the 19th century in Georgian times to illustrate the authors' views of London. During this period the industrial revolution was in full swing and the population was growing at alarming rates. The population increase was due to advancements in medicine, which allowed people to have more children. Both poems have been carefully structured to bring out certain words in them. For example William Blake's 'London' is written in four, four line stanzas. Each line of each verse has the same number of syllables; this creates a very strictly controlled effect, this is accompanies with alternate line rhyming to make the poem sound regular. ...read more.

Similarly he gives in verse 11 and 12, "And the hapless Soldiers sigh, Runs in blood down Palace walls", he uses the image of the soldier's sigh running in blood down the Palace walls as an attack against the monarchy and government for literally sentencing young men to death by making them fight in foreign wars. I have also observed that many of the words in Blake's poem have multiple meaning, such as in the first verse he mentions London's 'Charter'd' streets; this can be interpreted to mean the strict control over which the state and church have over society. On the other hand it can be interpreted to mean immoral. Looking at the rest of the poem I believe it is meant to be taken in the context of immoral as later on he touches on prostitution and other corrupt activities going on in the streets of London. Basing my self on Blake's unattractive perception of London and other texts of the same period describing the city; I believe Wordsworth's portrayal of the beauty of London is exaggerated. ...read more.

He describes the 'How the youthful Harlots curse, Blasts the new-born Infants tear'. He is showing that so much promiscuity is going on in the society of London that disease is spreading very fast and that the offspring are those that suffer the most. He then goes on to refer to the theme of marriage in respect to all this promiscuity, 'And blights with plagues the Marriage hearse', marriage is conventionally thought to be a happy occasion, however in this case it is shown to be a death sentence. Unlike Blake whose poem is very melodramatic and perceives the bigger picture, Wordsworth concentrates on describing London at one moment in the morning. Wordsworth shows no interest on what the future may hold for the people of London. In my opinion both these poems refer to the major problems London had during that time. Whilst Blake's ideas are conveyed in a more obvious manner, Wordsworth's are conveyed in a covert, almost encrypted manner. I find Wordsworth's much more interesting as it leaves much to the imagination and to the specific interpretation of the reader. ...read more.