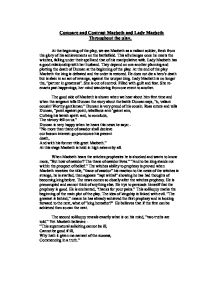 Compare and Contrast Macbeth and Lady Macbeth Throughout the play.

Compare and Contrast Macbeth and Lady Macbeth Throughout the play. At the beginning of the play, we see Macbeth as a valiant soldier, fresh from the glory of his achievements on the battlefield. This all changes once he meets the witches, falling under their spell and that of his manipulative wife. Lady Macbeth has a good relationship with her husband. They depend on one another planning and plotting the death of Duncan at the beginning of the play. At the end of the play Macbeth the king is defeated and the order is restored. He does not die a hero's death but is slain in an act of revenge, against the usurper king. Lady Macbeth is no longer the, "partner in greatness". She is out of control. Filled with guilt and fear. She re-enacts past happenings, her mind wandering from one event to another. The good side of Macbeth is shown when we hear about him first time and when the sergeant tells Duncan the story about the battle Duncan says, "o, valiant cousin! Worthy gentleman." Duncan is very proud of his cousin. Ross enters and tells Duncan, "point against point, rebellious arm 'gainst arm, Curbing his lavish spirit: and, to conclude, The victory fell on us." Duncan is very happy when he hears this news he says: - "No more than thane of cawdor shall decieve our bosom interest: go pronounce his present death, And with his former title greet Macbeth." At this stage Macbeth is held in high esteem by all. When Macbeth hears the witches prophesies he is shocked and wants to know more, "But how of cawdor? The thane of cawdor lives." "And to be king stands not within the prospect of belief." The witches ability to prophesy is proved when Macbeth receives the title, "thane of cawdor" his reaction to the news of the witches is strange, he is startled, then appears "rapt withal" showing he has had thoughts of becoming king before. ...read more.

Duncan is a good king and he has no good reason to kill Duncan except his ambition and the desire for power. The persuasion of Lady Macbeth works and Macbeth wants to do the murder. The soliloquy at the start of the play voices his fear and doubts. When Macbeth is talking to Banquo in Macbeth's castle few hours' later, he talks as if he is going to do the murder. After Macbeth hallucinates and sees dagger because he is feeling guilty of the deed he is just committing: - "There's no such thing: It is the b****y business, which informs Thus to mine eyes." He is so obsessed with murder that he is seeing things. He thinks the witches are doing this: - "Now witchcraft celebrates, Pale Hecat's off rings." A bell rings suddenly from nowhere which is a sign of the witches powers and he says it is an invitation to the murder. At the start of the murder scene Lady Macbeth is very nervous and agitated: - "Alack! I am afraid they have awaked, And tis not done: Th'attempt and not the deed Comforms us." This tells us that she is very panicky and doesn't want to get caught, if she does get caught her life being a queen will be ruined. When Macbeth arrives Lady Macbeth is very happy and knows that the deed, "my husband!" she says. The murder is over and Lady Macbeth is relieved but Macbeth's got a feeling he might get caught. Macbeth won't take back the daggers because he is so ashamed that he has done the murder and he can't say, "amen." All this happens because Lady Macbeth ignores the rules of humanity and organised society, pursuing her own ruthless motives. However, repeatedly Lady Macbeth gives the appearance of being in control but she was unable to kill the king herself, claiming he looked too much like her father, not much later she advises her husband: - "These deed must not be thought, After these ways: so, it will make us mad." ...read more.

The relationship between husband and wife is clearly becoming strained. They both move into their own worlds. They become distant and removed from one another. When the news finally comes that Lady Macbeth has died, Macbeth replies strangely, "she could have died here after." He feels nothing even when wife dies Yet, in spite of all the guilt and remorse, Macbeth is unable to confess and give up his position, living in a world of his own. His last days are spent as a worn out and tired man who realises the uselessness of his ambition and b****y deeds. There is world-weariness about his speech after he has received the news of his wife's death and inevitably of an attack on his castle. Life itself seems to have lost all meaning: - "Tomorrow and tomorrow and tomorrow Creeps in this petty pace from day to day, To the last syllable of recorded time." There is an aspect of Macbeth that we tent to forget in al the horror and fear with which we are faced. The above lines show another side of Macbeth: that of a man with a great deal of sensitivity and imagination. The point has been made repeatedly that Macbeth is first potrayed as a great man. We also watch his decline into evil as a result of his ambition, encouraged all the way by his wife. We are impressed at the end of the play that he chooses to fight instead of just giving in. The evil deeds committed by Macbeth far outweigh any true feelings if sympathy we might have for the man. So at the end of the play Malcolm speaks of Macbeth as a, "dead butcher." Yet we are moved to pity Lady Macbeth at the end of the play or is she also too far steeped in blood for us to feel compassion? But Macbeth the traitor, tyrant and murderer deserves to be punished by death. We cannot help but feel a sense of loss that comes with the destruction of a great man. ?? ?? ?? ?? Sazid Nanlawala 9 ...read more.