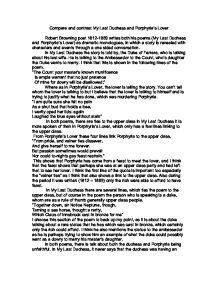 Compare and contrast My Last Duchess and Porphyria's Lover.

Compare and contrast My Last Duchess and Porphyria's Lover Robert Browning poet 1812-1889 writes both his poems (My Last Duchess and Porphyria's Lover) as dramatic monologues, in which a story is revealed with characters and events through a one sided conversation. In My Last Duchess the story is told by, the Duke of Ferrara, who is talking about his last wife. He is talking to the Ambassador to the Count, who's daughter the Duke wants to marry. I think that this is shown in the following lines of the poem. "The Count your master's known munificence Is ample warrant that no just pretence Of mine for dowry will be disallowed;" Where as in Porphyria's Lover, the lover is telling the story. You can't tell whom the lover is talking to but I believe that the lover is talking to himself and is trying to justify what he has done, which was murdering Porphyria. "I am quite sure she felt no pain As a shut bud that holds a bee, I warily oped her lids: again Laughed the blue eyes without stain" In both poems, there ...read more.

"Together down, sir Notice Neptune, though, Taming a sea horse, thought a rarity, Which Claus of Innsbruck cast in bronze for me" I choose this section of the poem to back up my point, as it is about the duke talking about a rare statue that he has which was cast in bronze, which certainly only the rich could afford. I think he also mentions the statue to the ambassador as he is perhaps trying to show him an example of what the duke could possibly want as a dowry to marry his master's daughter. In both poems, there is talk about both the duchess and Porphyria being unfaithful. In My Last Duchess, it never says that the duchess was having an affair, but the duke was jealous of her talking to the servants and treating them as well as she would treat the duke, this ultimately is the reason we are told in the story that see is killed. In porphyria's Lover however I believe that Porphyria is cheating on her husband, who I believe is upper class with the lover whom I believe is a common person. ...read more.

The reason the duchess is killed in the poem M y Last Duchess, is because she treats ever one the same and doesn't treat the duke specially. "Much the same smile? This grew, I gave commands Then all smiles stop together there she stands." I think he is also jealous that the duchess is polite to everyone and smile at them. "Or blush at least. She thanked men good! But thanked Somehow - I know not how - as if she ranked My gift of a nine - hundred years old name With anyone's gift. Who'd stop to blame." The duke is not bothered by his actions at all and shows no remorse for what he has done. I think that the duke justifies him killing the duchess by his power as he has lots of power and I believe he takes it for granted. I believe the duke is greedy and only wants the dowry form the count to marry his daughter. "Of mine for dowry will be disallowed." This shows that the duke is all too eager to get on and talk about a large dowry for himself. ...read more.