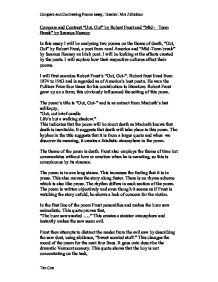 Compare and Contrast "Out, Out" by Robert Frost and "Mid- Term Break" by Seamus Heaney In this essay I will be analysing two poems on the theme of death, "Out, Out" by Robert Frost, a poet from rural America and "Mid-Term break" by Seamus Heaney an Irish poet. I will be looking at the effects created by the poets. I will explore how their respective cultures affect their poems. I will first examine Robert Frost's "Out, Out-". Robert frost lived from 1874 to 1963 and is regarded as of America's best poets. He won the Pulitzer Prize four times for his contribution to literature. Robert Frost grew up on a farm; this obviously influenced the setting of this poem. The poem's title is "Out, Out-" and is an extract from Macbeth's last soliloquy, "Out, out brief candle Life's but a walking shadow." This indicates that the poem will be about death as Macbeth knows that death is inevitable. It suggests that death will take place in this poem. The hyphen in the title suggests that it is from a larger quote and when we discover its meaning, it creates a fatalistic atmosphere in the poem. The theme of the poem is death. Frost also employs the theme of time but commentates without love or emotion when he is narrating, so this is conspicuous by its absence. ...read more.

Frost then says that his hand was already detached and there was nothing that the doctor could have done. The doctors then put the boy in, "The dark of ether" which means a crude form of anaesthetic, ether is also linked strongly with death, which might suggest that the doctor put him to sleep. Frost portrays the boy's innocence by describing, "Puffed out lips with his breath." Dark also represents death as contrast to day. Frost utterly understates the death forcing you to imagine it. The doctors are shocked at the boy's failing pulse and his death. The most shocking line in the poem is the last, "Since they were not dead, they turned to their affairs." This illustrates the detachment between people and suggests that death often takes place. This poem confuses and makes me wonder more about the characters. It does make me read in between the lines and it uses metaphors when describing death and life to very good use. This poem is quite obscure. I now move onto "Mid-Term Break". The poet Seamus Heaney wrote this autobiographical poem in the twentieth century. Heaney describes his wait to go home at the start of the poem. We don't know what he is waiting for but we have an indication of death when Heaney says that he was "Counting bells knelling" Funeral bells knell so that indicates death has taken place. ...read more.

reading and to show the mood, whereas "Mid Term break" is eight stanzas long to show the differing emotions of Seamus Heaney. The titles also differ in their help in predicting the theme of the poem. "Out, Out-" is an obvious reference to death whereas "Mid Term break" is more obscure. "Out, out-" is written in first person narrative like "Mid Term Break" but "Mid Term Break" is emotional. So it is more subjective. The use of the senses is used in both. In "Out, Out-" the use of sight is used when he describes the scenery as in "Mid-Term break" as Heaney describes his dead brother. They use sound in both as Frost describes the saw and in "Mid-Term Break" when Heaney describes his na�ve baby sibling. The sense of smell is used in "Out, Out-" as Frost describes the saw dust as "Sweet scented stuff." The writing techniques are different as personification is used in "Out, Out-". The techniques are similar as enjambment is used in both poems and alliteration are used as Frost describes "Sweet scented" and in Heaney's poem as he describes his brothers coffin as a "Four Foot box" I conclude that I preferred "Mid Term Break" as it is a timeless poem with a tear jerking mood. It is easy to relate to and you really feel for Seamus Heaney. Compare and Contrasting Poems essay, Teacher: Mrs J Sheldon Tim Cox ...read more.