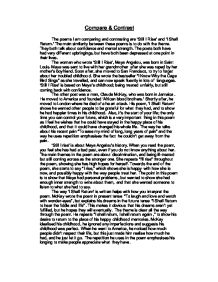 Compare and Contrast Poems; 'Still I Rise' and 'I Shall Return'

Compare & Contrast The poems I am comparing and contrasting are 'Still I Rise' and 'I Shall Return.' The main similarity between these poems is to do with the theme. They both talk about confidence and mental strength. The poets both have had very different upbringings, but have both been depressed at one point in their lives. The woman who wrote 'Still I Rise', Maya Angelou, was born in Saint Louis. Maya was sent to live with her grandmother after she was raped by her mother's boyfriend. Soon after, she moved to San Francisco, to try to forget about her troubled childhood. She wrote the bestseller "I Know Why the Cage Bird Sings" as she travelled, and can now speak fluently in lots of languages. 'Still I Rise' is based on Maya's childhood; being treated unfairly, but still coming back with confidence. The other poet was a man, Claude McKay, who was born in Jamaica. He moved to America and founded 'African blood brothers.' ...read more.

McKay wrote the poem in present tense "To laugh and love and watch with wonder-eyes", but explains his dreams in the future tense "I Shall Return to hear the fiddle and fife". This makes it obvious that his dreams aren't yet fulfilled, but he hopes they will eventually. The theme is clear all the way through the poem. He repeats "I shall return, I shall return again," to show his desire to return to the place of his happy childhood memories. McKay idealised his childhood, he ignored any imperfections and suggests his childhood was perfect. When he went to America, he noticed how much people didn't respect their life, but this just made him realise how much he had, and he just let it go. The repetition he uses in the poem emphasises his longing to make people appreciate what they have. Another of the main comparisons is that both poems are very personal; they decipher the poets' childhoods and longings in life. ...read more.

That is similar in both poems, but talk in completely different attitudes, whilst explaining similar things. In my opinion, both poems are equally as good. 'Still I rise' uses very strong metaphors to bring back how Maya feels about black female history. "I'm a black ocean, leaping and wide, welling and swelling..." is a brilliant phrase, using strong personification. A "black ocean" takes the biggest thing on the planet, and uses black to make it seem mysterious. "Welling and swelling" could be annotated in two different ways; that black history is becoming more recognised as a big thing, or, the "welling and swelling" of a woman's stomach when she is pregnant, emphasising the fact women play a big part in the world, that they are the ones who bring children into the world, and happiness. 'I shall return' is short but to the point. Claude takes beautiful things and 'twists' them, to make them seem they have a strong personality of their own. This poem is very effective with the way Claude uses very bold imagery. He takes things that people come across every day, but don't take them into consideration in the way they should. ?? ?? ?? ?? ...read more.