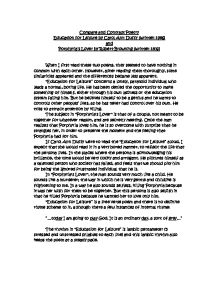 Compare and Contrast Poetry Education for Leisure by Carol Ann Duffy (written 1986) and Porphyria's Lover by Robert Browning (written 1832) When I first read these two poems, they seemed to have nothing in common with each other. However, after reading them thoroughly, some similarities appeared and the differences became less apparent. "Education for Leisure" concerns a lonely, paranoid individual who leads a normal, boring life. He has been denied the opportunity to make something of himself, either through his own laziness or the education system failing him. But he believes himself to be a genius and he wants to controls other peoples' lives, as he has never had control over his own. He tries to attract attention by killing. The subject in "Porphyria's Lover" is that of a couple, not meant to be together for whatever reason, and are secretly meeting. Once the man realises that Porphyria loves him, he is so overcome with surprise that he strangles her, in order to preserve the moment and the feeling that Porphyria had for him. If Carol Ann Duffy were to read the "Education for Leisure" aloud, I expect that she would read it in a very bored manner, to reflect the life that the persona lives. In the places where the persona is acknowledging his brilliance, the tone would be very cocky and arrogant. ...read more.

The most powerful image of the piece is in line 43: "As a shut bud that holds a bee." This simile is used to describe Porphyria as she was when she was strangled; the young bud that had not yet flowered, and holds the potential sting within it. The sting would be the part of her that would hurt him, and he killed her to preserve her loveliness and trap the sting. The vocabulary in "Education for Leisure" very much reflects the life of the character: bored, ignored and not appreciated etc. Most of the words are monosyllabic, enforcing this idea of the education system failing him and now he is not able to use more elaborate vocabulary. Many of the words and the things he does are boring and the author uses colloquialisms to describe these: he squashes the fly; he pours the goldfish down the bog etc. The vocabulary in "Porphyria's Lover" was slightly difficult to understand at first. Because the poem was written over 150 years ago, obviously there are differences in the way it is written, the way society was then etc. From the first line, the word order is different than how it would be written today. The fact that Porphyria wears a shawl and a cloak, and that she lights the fire and considers his needs first reflect when this poem was written i.e. ...read more.