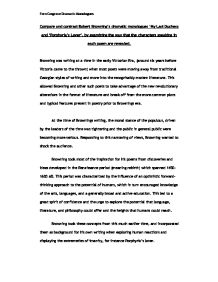 Compare and contrast Robert Browning's dramatic monologues 'My Last Duchess and 'Porphyria's Lover', by examining the way that the characters speaking in each poem are revealed

Compare and contrast Robert Browning's dramatic monologues 'My Last Duchess and 'Porphyria's Lover', by examining the way that the characters speaking in each poem are revealed. Browning was writing at a time in the early Victorian Era, (around six years before Victoria came to the thrown) when most poets were moving away from traditional Georgian styles of writing and more into the recognisably modern literature. This allowed Browning and other such poets to take advantage of the new revolutionary alterations in the format of literature and break off from the more common plots and typical features present in poetry prior to Brownings era. At the time of Brownings writing, the moral stance of the populous, driven by the leaders of the time was tightening and the public in general public were becoming more serious. Responding to this narrowing of views, Browning wanted to shock the audience. Browning took most of the inspiration for his poems from discoveries and ideas developed in the Renaissance period (meaning rebirth) which spanned 1450-1600 AD. This period was characterized by the influence of an optimistic forward-thinking approach to the potential of humans, which in turn encouraged knowledge of the arts, languages, and a generally broad and active education. This led to a great spirit of confidence and the urge to explore the potential that language, literature, and philosophy could offer and the heights that humans could reach. Browning took these concepts from this much earlier time, and incorporated them as background for his own writing when exploring human reactions and displaying the extremeties of insanity, for instance Porphyria's lover. ...read more.

It then comes as somewhat a shock when we discover later the Lovers passiveness because we expect from this intense snowball of bitter descriptions of the weather, for him to be wild and uncontrollable. This beginning builds up suspense, closely followed by Porphyria's entrance. As a result of this we immediately focus of Porphyria and her effect as a main character and the dominant partner in her relationship with the Lover. The first time we come into contact with the character of Porphyria, we see that she 'glided' angelically into the scene immediately taking control of the situation. We see her interrupt the scene and provide comfort to the situation to contrast the rage and ferocity set up by the pathetic fallacy prior to her entrance. Browning uses Porphyria's actions to reveal her character. For instance he says that she, 'shut out the cold and the storm.' This gives the impression that not only did she literally shut out the weather, but that she provided a release for the Lover from the world around them when they were together. It highlights his dependence on her and shows how she played to his weaknesses in an attempt to provoke a reaction from him. Browning goes on to show Porphyria letting down her hair and taking off her soggy coat and hat, 'let her damp hair fall.' This is symbolic of her letting herself go and making herself available s******y. ...read more.

She thanked men - good! But thanked Someone I know not how - as if she ranked My gift of a nine hundred year old name With anybody's gift." The Duke feels de-valued by her willingness to express gratitude for insignificant gifts equally to the gift of his company. He was envious of his wife and angry that she didn't fulfil his expectations of what a wife should be. Unfortunately for the Duchess, her innocent charm pushed the Duke to a desperate remedy. The Duke implies that his wife was wrong not to appreciate him more. He says that he could have taught her to behave like a duchess of the time but he wouldn't lower himself to accepting a wife who was not perfect, "And if she let Herself be lessoned so, nor plainly set Her wits to yours, forsooth, and made excuse - E'en then would be some stooping; and I choose never to stoop." The Duke eventually decides that he cannot live with the duchess and all her imperfections and is driven to the point at which he feels that there is not other solution than to give instructions for her killing, "I gave commands; Then all smiles stopped together." From this statement, we can infer that the Duke became enraged to the point he hired someone to kill his wife. We know that the marriage would have been one of political alliance between two kingdoms and that the Duke would have no problem replacing the duchess. ...read more.