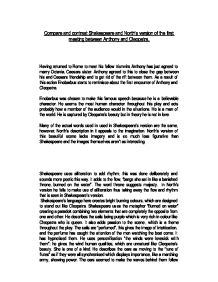 Compare and contrast Shakespeare and North's version of the first meeting between Anthony and Cleopatra.

Compare and contrast Shakespeare and North's version of the first meeting between Anthony and Cleopatra. Having returned to Rome to meet his fellow triumvirs Anthony has just agreed to marry Octavia, Caesars sister. Anthony agreed to this to close the gap between his and Caesars friendship and to get rid of the rift between them. As a result of this action Enobarbus starts to reminisce about the first encounter of Anthony and Cleopatra. Enobarbus was chosen to make this famous speech because he is a believable character. He seems the most human character throughout this play and acts probably how a member of the audience would in the situations. He is a man of the world. He is captured by Cleopatra's beauty but in theory he is not in love. Many of the actual words used in used in Shakespeare's version are the same, however, North's description in it appeals to the imagination. North's version of this beautiful scene lacks imagery and is so much less figurative than Shakespeare and the images themselves aren't as interesting. ...read more.

Even her men are described as beautiful "like smiling cupids" they are images of love. He then goes on to bring in more colours, blue which is also a very strong intense colour. The next scene is very feminine "flower-soft" which is a soft sensual sound he uses delicate words. Addition to this he uses very delicate and soft images, "Nereides", which are very young girls that live in water. This scene also adds to the character of Cleopatra and her beauty "Whistling to the air; but for vacancy, had gone to gaze on C North's opening passage uses a very long sentence, which seems to drag on, it makes up gasp for air, which makes it seem more exciting and exhilarating, but it isn't. Shakespeare also used some of the language used by North, which is noticeable. He doesn't write in iambic pentameter. There are a lot of references to precious metals. As a whole it is very complex. In North's version the banquet style dinner is extravagant, the word ordinary "And for his ordinary, pays his heart" Shakespeare uses as a joke. ...read more.

Shakespeare opening scene is more magical and interesting "burned on the water" metaphor is used but in North's it isn't. Shakespeare makes the scene much more feminine than North's, they both appeal to our senses by using perfume which is sweet but Shakespeare adds a mystery "invisible perfume". The feast that they have towards the end is extravagant and both develop Cleopatra's character further. Shakespeare uses three levels to describe and build up Cleopatra. The first of which he uses is to describe her nature, the identity of this essential character. He makes her out to be super natural the way he contrasts fire and water. He makes her seem like she can control the forces of nature. The next step is the way that he compares her to art. He compares her to the God Venus, the god of love. The third step that he uses is to make her seem above everything else by saying that even the winds would go see her if they could. She is better than anything nature could create. This is one of the major points that North just didn't' get across. ...read more.