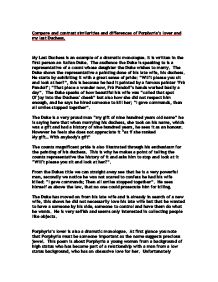 Compare and contrast similarities and differences of Porphyria's lover and my last Duchess. My Last Duchess is an example of a dramatic monologue. It is written in the first person an Italian Duke. The audience the Duke is speaking to is a representative of a count whose daughter the Duke wishes to marry. The Duke shows the representative a painting done of his late wife, his duchess. He starts by exhibiting it with a great sense of pride: "Will't please you sit and look at her?", this is because he had it painted by a famous painter 'Fr� Pandolf'; "That piece a wonder now, Fr� Pandolf's hands worked busily a day". The Duke speaks of how beautiful his wife was "called that spot Of joy into the Duchess' cheek" but also how she did not respect him enough, and he says he hired someone to kill her; "I gave commands, then all smiles stopped together". The Duke is a very proud man "my gift of nine hundred years old name" he is saying here that when marrying his duchess, she took on his name, which was a gift and had a history of nine hundred years, he sees it as an honour. However he feels she does not appreciate it "as if she ranked My gift... ...read more.

In comparison Porphyria's lover, who has no control, kills her himself, by strangling her with her hair. Hair can be quite a s****l thing and when he strangles her with her own hair, it is almost as if Porphyria, and her lover are killing her together, his hands and her hair. For the first time, they did something together and it was not only her in control, he has achieved his aim. Another similarity is the men are both killers, and the women are both killed. But the difference is, Porphyria is killed out of love, she is only killed because it was the only way her lover could stay with her forever. The duchess is killed out of spite and principal, the Duke did not love his wife as he just has her killed and he moves on, searching for a replacement. Another difference is that the Duke is a powerful man and sees himself as above the law, at his level there is only his law so he will get away with his wife's death even if someone finds out. On the other hand Porphyria's lover has no power at all and will be in especially big trouble because he killed some of a lot higher class than himself. ...read more.

The Duke chooses 'never to stoop' and is overly conscious of class and social etiquette. Porphyria's Lover is a total contrast to this. Instead of trying to be magnificent and powerful, like the Duke. Porphyria's Lover is silent and eerie; he seems to be disinterested in life, sitting in the cold, with the "sullen wind" and the door open. But the two characters are alike in that they share common values; they want to be appreciated and be the only person in their partner's life. These values can be seen as very selfish. Porphyria in lines 21-30 is "murmuring" how she loves her partner, but she was above him in status so she cannot "set" her heart's "struggling passion free", and make their relationship public. She seems very arrogant and assured of his love. And yet in lines 15-30 the impression you might get of Porphyria is of a sweet, caring girl who is besotted with her lover and is giving him a mini speech about how she loves him. Both women are uniform in their cheerfulness, as the men are comparable in their callousness. The men are intense whilst the women light. My Last Duchess is written in a statelier and higher approach. This immediately becomes apparent when comparing it to Porphyria's Lover, which is written in eight syllables per line and has a more ordinary feel to it. ...read more.