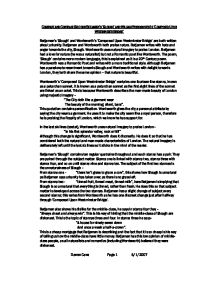 COMPARE AND CONTRAST SIR JOHN BETJAMEN'S 'SLOUGH' AND WILLIAM WORDSWORTH'S 'COMPOSED UPON WESTMINSTER BRIDGE' Betjamen's 'Slough' and Wordsworth's 'Composed Upon Westminster Bridge' are both written about urbanity. Betjamen and Wordsworth both praise nature. Betjamen writes with hate and anger towards the city, Slough. Wordsworth uses natural imagery to praise London. Betjamen had a love for nature (he was a naturalist) but not a Romantic poet like Wordsworth. The poem, 'Slough' contains more modern language, this is explained as it is a 20th Century poem. Wordsworth was a Romantic Poet and writes with a more traditional style. Although Betjamen has a passionate resentment towards Slough and Wordsworth writes with delight towards London, they both share the same opinion - that nature is beautiful. Wordsworth's 'Composed Upon Westminster Bridge' contains one fourteen-line stanza, known as a petarchan sonnet. It is known as a petarchan sonnet as the first eight lines of the sonnet are linked as an octet. This is because Wordsworth describes the man-made beauty of London using majestic imagery - "The City doth like a garment wear The beauty of the morning; silent, bare". This quotation contains personification. Wordsworth gives the city a personal attribute by saying the city wears a garment. ...read more.

Stanza eight is more about the lack of respect for nature that the people of Slough have, it reads - "And daren't look up and see the stars But belch instead". The fact that they don't even notice the stars shows the lack of appreciation to nature (or the stars). This is enforced by how they belch instead. Wordsworth was on the side of the peasants against the old English Monarchy. He lost his support for them after he saw their violent actions in the French Revolution. His support then went with his beloved country; we can see traces of his support for English royalty in throughout the whole poem. It is unusual for a Romantic to praise a city; we know that Wordsworth's love for London comes from his respect and admiration for English Monarchy and Royalty. This came from his dislike towards the actions of the peasants. Betjamen also links his stanzas through the rhyme scheme. The last word in each stanza rhymes with the last word in its pair. For example - Stanza one - "Swarm over, Death!" Stanza two - "Tinned minds, tinned breath." This is done to emphasise the linking of subject matter between the paired stanzas. ...read more.

This is typical of the language that would be used by a Romantic Poet like Wordsworth, as they believe nature is the place of purity. 'Composed Upon Westminster Bridge' seems like a softhearted and majestic poem. We know this because of the sentimental words that he uses - "Majesty" and "beauty" are both examples of these words. All these words describe London and tell of its flawless attributes. This shows Wordsworth's approach and is a common approach among most Romantic poets, Wordsworth's is significant though as it is written about Urbanity. Betjamen's approach is quite the opposite of Wordsworth's. He uses words like - "synthetic" and "bogus" which show his poem is based around complaint, significantly different to Wordsworth. He does this to put forward his points about Slough's urbanity and the problems it creates. The writers use different tones but they use them to for the same reasons, to get their points across with maximum force. These two poems are both structurally excellent and each one communicates its purpose well. Sir John Betjamen tells us of how Slough lacks experimentation and is unnatural in many ways. William Wordsworth notifies us of London's sublime natural characteristics. These two poems are a great example of how similar viewpoints can be transmitted into opposites - a love, and a hate. Darren Cave Page 3 5/1/2007 ...read more.