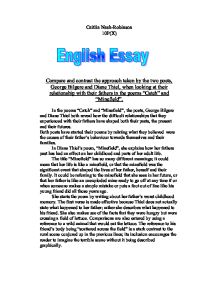 Compare and contrast the approach taken by the two poets, George Bilgere and Diane Thiel, when looking at their relationship with their fathers in the poems &quot;Catch&quot; and &quot;Minefield&quot;.

Caitlin Nash-Robinson 10P(X) Compare and contrast the approach taken by the two poets, George Bilgere and Diane Thiel, when looking at their relationship with their fathers in the poems "Catch" and "Minefield". In the poems "Catch" and "Minefield", the poets, George Bilgere and Diane Thiel both reveal how the difficult relationships that they experienced with their fathers have shaped both their pasts, the present and their futures. Both poets have started their poems by relating what they believed were the causes of their father's behaviour towards themselves and their families. In Diane Thiel's poem, "Minefield", she explains how her fathers past has had an effect on her childhood and parts of her adult life. The title "Minefield" has so many different meanings; it could mean that her life is like a minefield, or that the minefield was the significant event that shaped the lives of her father, herself and their family. It could be referring to the minefield that she sees in her future, or that her father is like an unexploded mine ready to go off at any time if or when someone makes a simple mistake or puts a foot out of line like his young friend did all those years ago. She starts the poem by writing about her father's worst childhood memory. The first verse is made effective because Thiel does not actually state what happened to her father; rather she describes what happened to his friend. ...read more.

She is looking towards her future and wondering if her own personal experience of growing with a difficult father will shape her ability to be a good parent or will, once again, the past rise through another generation to carry on causing suffering again. Thiel says that she "would have to run on alone" this means that she is still running from her fathers past as well as her own, and is she using his past as a justification for her actions as her father uses the past as an excuse for his own actions and as a reason for the type of man he has become. George Bilgere doesn't write about his fathers past, but about his father's obsession/hobby that did not affect his fathers past but his, George Bilgere, own past, present and future. Bilgere didn't care for his father's hobby but only paid attention to see if his father could live up to Bilgeres childhood aspirations/dreams as to what his father was, is or could be. Bilgere does not try to soften the blow in the same manner as Thiel does, because Bilgere has faced up to the fact that his father is not the man he thought and hoped he would be, but Thiel understands why her father is like he is, although they are both afraid of what might happen with their fathers in the future. ...read more.

The fathers throw was like a "raw confession", it was never rough around the edges or covered up to soften the blow of what his father was capable of doing. His throw was "helpless in the failing light" in which Bilgere can still feel "the b***s soft kiss". "Thirty years later" makes it seem like he, Bilgere, can never escape the embarrassment which his father subjected him to as a child, always trying, but never achieving in what Bilgeres father thought he knew everything about. Although Bilgere is older and has faced up to the reality of what his father put him through he is still "afraid to throw it back" because he still doesn't want to face the humiliation that his father subjected him to, but still might think that some of his aspirations/dreams about his father may still come true. "Minefield" by Diane Thiel and "Catch" by George Bilgere are both based on difficult relationships between father and child, Thiel and Bilgere approach the subject in completely different ways. Thiel relates all her experiences to her fathers past, while Bilgere concentrates on his own feelings whilst ignoring how his father may have felt. Thiel shows some compassion for her father while Bilgere seems to be more selfish in his appraisal of his father's behaviour. Both poets express themselves as worrying that their fathers have taken over their lives, rather than allowing them to shape their own futures, while offering gentle guidance. ...read more.