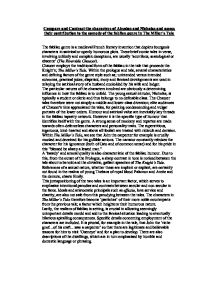 Compare and Contrast the characters of Absolon and Nicholas and assess their contribution to the comedy of the fabliau genre in The Miller's Tale The fabliau genre is a medieval French literary invention that depicts bourgeois characters in satirical or openly humorous plots. These brief comic tales in verse, involving unlikely and complex deceptions, are usually 'scurrilous, scatological or obscene' (The Riverside Chaucer). Chaucer employs the traditional form of the fabliau in the tale that proceeds the Knight's; The Miller's Tale. Within the prologue and tale, several characteristics and defining factors of the genre style such as; unintended versus intended outcomes, practical jokes, slapstick, irony and farcical developments are used in relaying the satirical story of a husband cuckolded by his wife and lodger. The particular natures of the characters involved are obviously a determining influence in how the fabliau is to unfold. The young sexual intruder, Nicholas, is typically a student or cleric and thus belongs to no definable class. The Chaucer tales therefore were not simply a middle and lower class diversion; elite audiences of Chaucer's time appreciated the tales, for painting condescending and vulgar portraits of the lower orders. Humour and satirical value are inevitably key threads in the fabliau tapestry network. However it is the specific type of humour that identifies itself with the genre. ...read more.

Much detail is provided to the appearance and furnishings of the scholar's room and lends an insight into Nicholas' interests. Equipment for divination and a bookcase are among the objects in his room, along with a 'gay sautrie' on which he accompanies himself as he sings the Angelus ad virginem. St. Nicholas was the patron saint of sweet smells and of young girls; this is supported by the abundance of 'rootes', 'licoris' and 'cetewale' he has in his room. An interest in music is also a talent shared by Absolon, the 'mirie...parish clerk'. Absolon also plays an instrument, in this case 'on a giterne in al the toun...brew house.... and taverne' and unlike Nicholas' 'blessed and mirie throte' has 'a loud and quinible' voice. He is introduced in a set of lengthy description, twenty-five lines long. A similar substantial piece of description is given to Alison. This places in the mind of the listener, a slightly effeminate quality also emphasised by the language in the phrasing used. 'His heer, and as the gold it shoon' affirms a feminine and extravagant appearance, as blonde or golden hair was usually associated with women. The word 'crul' is used to describe Absolon's hair and through the process of metathesis Chaucer is inviting the clerk's ridiculing. The description of his appearance continues, illustrating his 'red robe' and his eyes, which were as 'grey as geese.' ...read more.

To a medieval listener, Absolon would have warranted all contempt and disdain towards him, due to his acting above his station. The parish clerk is enjoying the role as an effictio lover, wistful and woebegone due to the 'love-loninge...in his herte.' The fact that he refuses the offerings and alms of the wives in the church shows that his ideals of a courtly lover are far from correct. Several factors emphasise the comedic value of the effictio parody, for example his judgement of Alison in contrast with Nicholas' shrewd direct approach. Absolon believes that Alison is 'so propre and sweete and likerous' and calls her a 'paramours'. In the courtly love tradition knights would submit and fawn over an unobtainable 'kept-woman'. The lady would remain chaste, modest and demure, however Alison is, again, far from this ideal and the love service Nicholas had to 'endure' is virtually inexistent. The contrast in language used by both suitors, serves to highlight Absolon's farcical and foolish attempts to woo a married woman and one of lower-middle class. Nicholas uses coarse and contentious language in order to win Alison's favour. "Ywis, but if ich have my wille, for deerne love of thee, lemman, I spille." (Lines 169-70) Again the notion of secret love and defining bawdy lexis of the fabliau is employed in the expression. The words 'lemman' and 'spille' are conjure a sense of the vulgar and proletariat. ...read more.