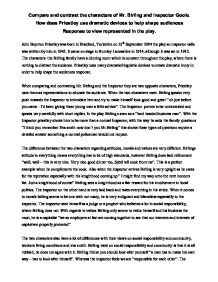 Compare and contrast the characters of Mr. Birling and inspector Goole. How does Priestley use dramatic devices to help shape audiences response to view represented in the play.

Compare and contrast the characters of Mr. Birling and inspector Goole. How does Priestley use dramatic devices to help shape audiences Response to view represented in the play. John Boynton Priestley was born in Bradford, Yorkshire on 13th September 1984 the play an inspector calls was written by him in 1945. It came on stage in Burnley Lancashire in 1914, although it was set in 1912. The characters- the Birling family have a dinning room which is constant throughout the play, where there is nothing to distract the audience. Priestley uses many dramatic/linguistic devices to create dramatic irony in order to help shape the audiences response. When comparing and contrasting Mr. Birling and the Inspector they are two opposite characters, Priestley uses them as representations to educate the audience. When the two characters meet. Birling speaks very posh towards the Inspector to intimidate him and try to make himself look good and great " oh just before you came - I'd been giving these young men a little advice". The Inspector proves to be uninterested and speaks very carefully with short replies. ...read more.

Birling thinks you should look after yourself "a man has to make his own way - has to look after himself". Whereas the inspector feels we are "responsible for each other". The inspector's view on workers living conditions are also different. Birling thinks that the living conditions of his employees are nothing to do with him at all, "on the streets?" intending becomes a prostitute, which he would not care if they did. When the workers asked for a raise from birling he refused "you've got to come down sharp, or they'd soon be asking for the earth" but the Inspector disagrees and is quick to reply with "it's better to ask for the earth than to take it". This is a moralising the Inspector uses to teach birling right from wrong. With Eva smith when the inspector told the family about her death, Birling said he hardly knew her "well we've several hundred young women here, y'know they keep changing". He was even surprised the Inspector came to him "yes, yes horrid business but I don't understand why you should come here Inspector" Birling is only interested in shifting the blame from his direction as he feels no responsibility. ...read more.

He tries to show how a family like the Birlings treat lower class people, "we need to look after the millions of Eva smiths and John smiths". In addition when birling sys about "were not a third world country why should we look after those" priestly wants to change this view. He thinks more and more people will have to realise they have to look after themselves and others, Priestley sees just looking after you selfish. The message is we have got to be more socially responsible, so this message would still be relevant today. Moreover the lighting at the start of the play is pink however when the inspector arrives it changes to a brighter, harder colour. Priestley is trying to get the audience involved in the play. He is trying to show In conclusion Birling and the Inspector are two opposite characters priestley used birling and his views as the audience and the inspector as himself hoping he could change their views as it would help society. Priestly was getting across to the audience the message that, at the end of the day everyone's got to help with society or else all of us will die. Therefore the message is still relevant today "we do not live alone". ...read more.