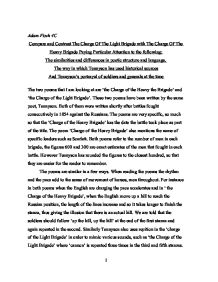 Adam Fisch 4C Compare and Contrast The Charge Of The Light Brigade with The Charge Of The Heavy Brigade Paying Particular Attention to the following: The similarities and differences in poetic structure and language, The way in which Tennyson has used historical sources And Tennyson's portrayal of soldiers and generals at the time The two poems that I am looking at are 'the Charge of the Heavy the Brigade' and 'the Charge of the Light Brigade'. These two poems have been written by the same poet, Tennyson. Both of them were written shortly after battles fought consecutively in 1854 against the Russians. The poems are very specific, so much so that the 'Charge of the Heavy Brigade' has the date the battle took place as part of the title. The poem 'Charge of the Heavy Brigade' also mentions the name of specific leaders such as Scarlett. Both poems refer to the number of men in each brigade, the figures 600 and 300 are exact estimates of the men that fought in each battle. However Tennyson has rounded the figures to the closest hundred, so that they are easier for the reader to remember. The poems are similar in a few ways. When reading the poems the rhythm and the pace add to the sense of movement of horses, men throughout. For instance in both poems when the English are charging the pace accelerates and in ' the Charge of the Heavy Brigade', when the English move up a hill to reach the Russian position, the length of the lines increase and so it takes longer to finish the stanza, thus giving the illusion that there is an actual hill. ...read more.