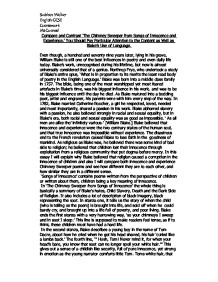 Compare and Contrast 'The Chimney Sweeper from Songs of Innocence and Experience.' You Should Pay Particular Attention to the Content as Well as Blake's Use of Language.

Compare and Contrast 'The Chimney Sweeper from Songs of Innocence and Experience.' You Should Pay Particular Attention to the Content as Well as Blake's Use of Language. Even though, a hundred and seventy nine years later, lying in his grave, William Blake is still one of the best influences in poetry and even daily life today. Blake's work, unrecognised during his lifetime, but now is almost universally considered that of a genius. Northrop Frye, who undertook a study of Blake's entire opus, 'What is in proportion to its merits the least read body of poetry in the English Language.' Blake was born into a middle class family in 1757. The bible, being one of the most worshipped yet most feared artefacts in Blake's time, was his biggest influence in his work, and was to be his biggest influence until the day he died. As Blake matured into a budding poet, artist and engraver, his parents were with him every step of the way. In 1782, Blake married Catherine Boucher, a girl he respected, loved, needed and most importantly, shared a passion in his work. Blake abhorred slavery with a passion, he also believed strongly in racial and sexual equality, but in Blake's era, both racial and sexual equality was as good as impossible. ' As all men are alike tho' infinitely various.' ...read more.

In the fourth stanza, His dream takes a turn, and an angel opens all the locked black coffins with a golden key, and all the chimney sweepers are set free. They are able to cleanse themselves in the river and play in the bright sun. Dreams represent something; they represent messages and meanings, and even can become reality at some point later in life or even soon after the dream has occurred. This dream that this child had, is a message of power, but also comfort at the turning point, it is saying that it is all going to be okay, the bright key is telling us that tom wont be locked in this embrace for his life, and the brightness encourages warm and strength for him to keep going, 'then down a green plain leaping, laughing as they run and wash in a river, and shine in the sun.' this is showing that there will be good times in his reality. They are able to forget for a moment about their lives that are doomed with work and poverty. In the fifth stanza, it says still dreaming and playing among the clouds Tom is told by the angel that if he is good, God will always take care of him. ...read more.

Even the churches don't care about these children. Blake scorns not only these children's parents, but god also, god is the guardian of children, and he's supposed to look after them but actually, they collaborate with these wrong doings and slavery of children. I think both poems are completely different from one another in some ways, like the fact that the moral of these poems are the same, to give us a message that these children are in suffering. But they are completely different in the fact that 'The Chimney Sweeper from Songs of Innocence' is conveying God in a good light, it shows religion is a good thing, and it shows innocence in all these children, and this innocent childish like feeling is there when you read it, whereas, 'The Chimney Sweeper from Songs of Experience' conveys God and Religion, even the King and Parents, in an evil way, it makes us feel ashamed that someone as human as us can do that to a child, and it gives you a sense of experience, like a lamb, as innocent as that is, compared to a gun, how experienced is that? Also the illustration with the poem gives off this sense of evil, with all the black, and the expression of the chimney sweeper is sad, tied down, locked up inside. ?? ?? ?? ?? Siobhan Walker English GCSE Coursework Ms Counsel ...read more.