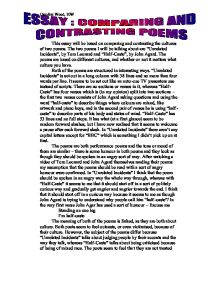 Compare and contrast the cultures of two poems - Unrelated Incidents, by Tom Leonard and Half-Caste, by John Agard

This essay will be based on comparing and contrasting the cultures of two poems. The two poems I will be talking about are "Unrelated Incidents", by Tom Leonard and "Half-Caste", by John Agard. The poems are based on different cultures, and whether or not it matters what culture you have. Both of the poems are structured in interesting ways. "Unrelated Incidents" is set out in a long column with 38 lines and no more than four words per line. It seems to be set out like an auto-cue TV presenters use instead of scripts. There are no sections or verses in it, whereas "Half-Caste" has four verses which is (in my opinion) split into two sections - the first two verses consists of John Agard asking questions and using the word "half-caste" to describe things where colours are mixed, like artwork and piano keys, and in the second pair of verses he is using "half-caste" to describe parts of his body and states of mind. ...read more.

"half-caste"/ In the very first verse John Agar has used a sort of humour - Excuse me Standing on one leg I'm half-caste The meaning of both of the poems is linked, as they are both about culture. Both poets seem to feel outcaste, or even victimised, because of their culture. However, the subject of the poems differ because "Unrelated Incidents" talks about judging people by their accents and the way they talk, whereas "Half-Caste" talks about being criticised because of being of mixed race. The poets seem to feel that they are not treated normally and they don't get enough respect because of who they are and the way they talk. Tom Leonard has written his poem in such a way that he is the newsreader, and he is criticising people with a Glaswegian accent, describing each person as "wanna yoo scruff" - this makes me think that this is the way that Tom Leonard thinks people would describe him. John Agard doesn't understand why he is considered to be "half-caste" just because he is of mixed race because in his opinion the word "half-caste" is wrong, as when two colours are mixed together it does not create something "half-caste". ...read more.

I thought it was quite unusual that "Unrelated Incidents" was set out in a column with no more than four words per line, yet I think that it is interesting and inventive that it is structured like a TV presenters auto-cue. Although I like the fact that the poems are written phonetically I found that the different dialect accents were quite difficult to get your tongue around. I also enjoyed the fact that both poems were performance poems, which made them more interesting to hear and read aloud. Although both poems are very different they do have quite a few similarities and links. Both poems got me thinking that it would be better if we opened our eyes and realised that such easily tossed around phrases like "half-caste" can be hurtful. Both poets seem to feel that they are disrespected, and it made me open my mind to a few thoughts: are people of different cultures treated unfairly? Are some people considered to be better than others because of their cultures? Are people criticised because of their cultures, and if they are what can be done to prevent this? Caroline Wood, 10W ...read more.