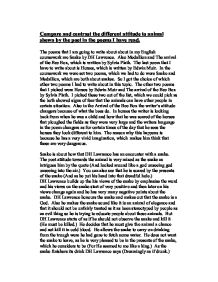 Compare and contrast the different attitude to animal shown by the poet in the poems I have read.

Compare and contrast the different attitude to animal shown by the poet in the poems I have read. The poems that I am going to write about about in my English coursework are Snake by DH Lawrence. Also Medallion and The arrival of the Bee Box, which is written by Sylvia Plath. The last poem that I have to write about is Horses, which is written by Edwin Muir. In the coursework we were set two poems, which we had to do were Snake and Medallion, which are both about snakes. So I got the choice of which other two poems I had to write about in this topic. The other two poems that I picked were Horses by Edwin Muir and The arrival of the Bee Box by Sylvia Plath. I picked these two out of the list, which we could pick as the both showed signs of fear that the animals can have other people in certain situation. Also in the Arrival of the Bee Box the writer's attitude changers because of what the bees do. In horses the writer is looking back from when he was a child and how that he was scared of the horses that ploughed the fields as they were very large and the writers language in the poem changers as for certain times of the day that he sees the horses they look different to him. ...read more.

Sylvia users some personification in the poem this is (Unhinged and his grin crooked.) Snakes do no have crooked grins and snakes do unhinge their jaws when eating but this is meant as if the snake is dead its jaws has no movement and just hangs down. In the last verse Sylvia users a Caesura were she disrupts the rytherm show she can show a more horrific and that she has made him a honourable soldier but we then find out how the snake was killed by the brick. The connection between Medallion and The arrival of the Bee Box are that they both have cruelty in but one is from the gardener and the other is from Sylvia, as she cannot stand the bees noise that the make and this annoys her. She does not care for these bees, as they are not her responsibility. The poem is about how Sylvia receives a box of bees and she does not no what to do with them (How can I let them out.) Her attitude towards the bees is that she is scared of them (I am not Caesar.) Here she is saying that she is not in charge of the bees and that she is not in charge of them. She cannot stand the bees as they make to much noise and this affects her and you can see this by when she says (It is the noise that appals me the most of all.) ...read more.

Again to do with the power which these horses have he says there eyes (Gleamed with a cruel apocalyptic light.) Then near the end of the poem he says (Ah now it fades! It fades!) He users repetition to say that he is now come out of his dream of his youth spent on his family farm. Then in the last verse he says (Where the blank field and still standing tree.) He has visited the sight and that is all that is left of the farm. My conclusion is that Snake and Medallion may both be about snakes but the writers have very different experiences with snakes. As when they both meet the snakes one is dead and the other is drinking. In Medallion the snake is treated like soldier that died in battle and in snake the snake is treated with respect and then is attacked by the writer with a log. The other two are about very different experiences with animals as in the arrival of the Bee Box the poet is scared by the bees and the same happens in Horses, as the writer in that is scared of the horses. The poem, which I liked the most, was the arrival of the Bee Box as it is about how that something new can be scary and ho that she decides at the end she can not keep the Bees in the Box and she will let them free. ...read more.