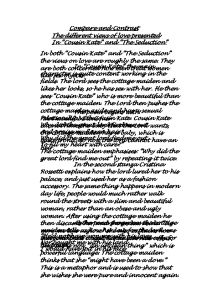 Compare and Contrast The different views of love presented In &quot;Cousin Kate&quot; and &quot;The Seduction&quot;.

This is a metaphor and is used to show that she wishes she were pure and innocent again. As the poem progresses the cottage maiden tells us how her love for the lord was true, and how cousin Kate's love was only for his power: "He'd not have won me with his love Nor bought me with his land I would have spit in his face And not have taken his hand." This is talking to cousin Kate and saying the cottage maiden wouldn't marry him no matter what he gave her. In the final stanza, we find out that the cottage maiden has a son, and is proud and ashamed of him at the same time. This is ironic because the lord wants a son to give his land to, cousin Kate cannot conceive and therefore the lord has made a drastic mistake. ...read more.

Which shows that she wants to be innocent like she was before. As the poem progresses the poem tells us about the boy who has taken advantage of the teenage girl. It describes him as a disgrace because he truants school and takes drugs. In the final stanza, the girl describes how she feels about its better to be anorexic than to be pregnant at her age: "Better to starve yourself, like a sick precocious child Than to walk through town with a belly huge and ripe." She also thinks that the neighbours will think that she always "looked the type". In conclusion the problems of men using women as sex objects has never changed, the women has sex with the men and in return they get nothing. The poems are very similar even though they were written in different centuries. By Brad Morton ...read more.