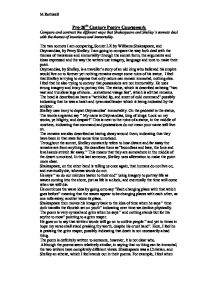 Compare and contrast the different ways that Shakespeare and Shelley's sonnets deal with the themes of transience and immortality.

Pre-20th Century Poetry Coursework Compare and contrast the different ways that Shakespeare and Shelley's sonnets deal with the themes of transience and immortality. The two sonnets I am comparing, Sonnet LX by Williams Shakespeare, and Ozymandias, by Percy Shelley. I am going to compare the way both deal with the themes of transience and immortality through the sonnet form, the arguments and ideas expressed and the way the writers use imagery, language and tone to make their point. Ozymandias, by Shelley, is a traveller's story of an old king who believed his empire would live on to forever yet nothing remains except some ruins of his statue. ...read more.

The remains are also described as having decay around them, indicating that they have been in that state for some time unnoticed. Throughout the sonnet, Shelley constantly refers to how distant and far away the remains are from anything. He describes them as "boundless and bare, the lone and level sands stretch far away." This means that they are somewhere in the middle of the desert unnoticed. In this last sentence, Shelley uses alliteration to make the point more clear. Shakespeare, on the other hand is telling us once again, that humans do not live on, and eventually die, whereas words do not. He says " so do our minutes hasten to their end" using imagery to portray life as waves coming into the shore, just as life is a clock, and eventually the time will come when we will die. ...read more.

Here, I feel he is praising the grim reaper, possibly indicating that death is not necessarily a bad thing. The poem is definitely written to someone, however, it is not clear who. Although the poems seem relatively similar, in saying that no thing can be immortal, the two writers have completely different views. Shakespeare was a Christian, and Shelley an atheist, which I feel stands out in their poems. For example, I feel when Shakespeare is writing, he is referring to the grim reaper as the devil, an opposite to god and a popular theory in Christanity. Shelley, however makes no comment to religion and I feel this is a key notion in comparing the two. M.Rothwell ...read more.