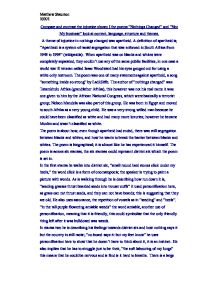 Compare and contrast the injustice shown I the poems nothings changed and not my business look at content, language, structure and themes.

Compare and contrast the injustice shown I the poems "Nothings Changed" and "Not My business" look at content, language, structure and themes. A theme of injustice in nothings changed was apartheid. A definition of apartheid is; "Apartheid is a system of racial segregation that was enforced in South Africa from 1948 to 1994" (wikipeidia). When apartheid was on blacks and whites were completely separated, they couldn't use any of the same public facilities, in one case a world war II veteran called Isaac Woodward had his eyes gouged out for using a white only restroom. The poem was one of many statements against apartheid, a song "something inside so strong" by Ladi Siffe. The author of "nothings changed" was Tatamkhulu Afrika (grandfather Afrika), this however was not his real name it was one given to him by the African National Congress, which were basically a terrorist group; Nelson Mandela was also part of this group. He was born in Egypt and moved to south Afrika as a very young child. He was a very strong willed man because he could have been classified as white and had many more luxuries; however he became Muslim and wasn't classified as white. The poem is about how, even though apartheid had ended, there was still segregation between blacks and whites, and how he wants to break the barrier between blacks and whites. ...read more.

He wants to break the glass, "shiver down the glass" the glass could be thought to be a barrier between blacks and whites, and he wants to break it down as if he were breaking down the wall of apartheid. The use of glass for the wall of apartheid could mean that it is fragile. The last line is "nothings changed" which is the first line, this could be interpreted as a circle, and that apartheid will never end. I think that the poem is very effective, with lots of hidden meaning. It is shows the writers feelings clearly and truth about apartheid. "Not my business", written by Niyi Osundare, is based on a famous poem written by Pastor Martian Niemoller in the 1930s to oppose Nazism called "first the came" the points made b both poems are the same, you should speak out for other people so they can speak up for you. It is about dictatorship and how the control people life's, there have been many dictators e.g. Stalin and Hitler, this is about General Abacha, the dictator of Nigeria. The poem is in first person but the speaker is not the poet. The poem is set over 4 verses. ...read more.

In "Not My Business" people are judged on there political backgrounds, democrats were targeted, and sometimes killed. They were both affected by there government in the first poem people were made to live in different places according to there skin colour. In Osundare's poem people were not allowed to think differently if they were they were killed, everyone had to obey the dictator. Both poets are sending out a similar message and that is to fight against the government. Both poets use similar techniques e.g. Alliteration, personification, similes and metaphors. Most of the techniques are used to imply meanings. The poems also have many differences; "Nothings Changed" is set in South Africa and "Not My Business" is set in Nigeria. The way the poems are written are different also; Afrika's poem is autobiographical, however the second poem is the writer is not the speaker. Also the events that happen in them are totally different; in the first poem there is no violence: just a man walking through District six. However, in Osundare's poem people are beaten and killed. I think that "Not my Business" is the more effective poem, because it makes a statement clearly, and could be a real situation that people relate to. It also has a slight sense of fear in it e.g. it is saying if you don't speak up you could die, it is very motivational. ?? ?? ?? ?? Matthew Staunton 10X/1 ...read more.