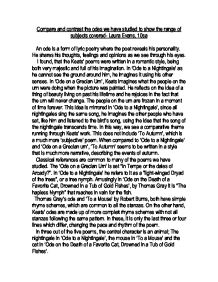 Compare and contrast the odes we have studied to show the range of subjects covered- Laura Evans, 10sa An ode is a form of lyric poetry where the poet reveals his personality. He shares his thoughts, feelings and opinions as we see through his eyes. I found, that the Keats' poems were written in a romantic style, being both very majestic and full of his imagination. In 'Ode to a Nightingale' as he cannot see the ground around him, he imagines it using his other senses. In 'Ode on a Grecian Urn', Keats imagines what the people on the urn were doing when the picture was painted. He reflects on the idea of a thing of beauty living on past his lifetime and he rejoices in the fact that the urn will never change. The people on the urn are frozen in a moment of time forever. This idea is mirrored in 'Ode to a Nightingale', since all nightingales sing the same song, he imagines the other people who have sat, like him and listened to the bird's song, using the idea that the song of the nightingale transcends time. ...read more.

He makes it seem like a friend, someone you can relate to: "Close bosom-friend of the maturing sun" The thing that separates 'To a Mouse' from the other four odes is that it is written in Scottish dialect; "A daimen icker in a thrave 'S a sma' request:" The use of dialect changes the mood the language can create because it is unfamiliar. The dialect is lifted from how the people of Scotland spoke at the time. This limits the possibility for creating grandeur and opulence because it allied it with the Scottish peasants. This poem is written in a conversational style making it much less formal and more 'common'. Because the poem is written as a conversation, it leaves little to the imagination or the senses. The structure of the stanzas is much simpler, with the simpler rhyme scheme. In Keats' 'To Autumn', some of the lines end with punctuation, whereas others continue from one line to the next. This is called enjambment and causes the sense of being dragged out, the passage of time. In the final stanza, he drags the lines out, not only by enjambment but also by the repetition of 'and' to join each line. ...read more.

This illustrates that a poem as well as having a range of subjects can also have a very different purpose. The theme of 'To Autumn' is to value everything for itself: "Where are the songs of Spring? Ay, where are they? Think not of them, thou hast thy music too, -" In some ways, this sums up the morals of the other odes, in that with 'Ode on a Grecian Urn' and 'Ode to a Nightingale' Keats is suggesting that mortal beauty being transient should not be too highly valued. The moral for the 'Ode on the Death of a Favorite Cat, Drowned in a Tub of Gold Fishes' is that: "Nor all, that glisters, gold." meaning that one should not judge things on their appearance. In 'To a Mouse' Robert Burns suggests that we should value things as we go because the future might not turn out as we expect: "In proving foresight may be vain: ... An' lea'e us nought but grief and pain, For promis'd joy." Although, at first these odes appear to have widely differing subjects and styles, and structures when studied more closely, it appears that they are connected by a variety of themes and common elements. ...read more.