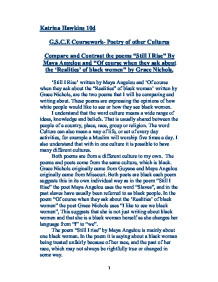 Compare and Contrast the poems

The structure of the poem is written in four lined stanzas with regular rhyming scheme of abcb, the 2nd and 4th lines rhyme. Except for the last two stanzas. I believe Maya Angelou has done this too show that now she has regained her confidence, she is rising much faster than ever before above everything that has happened in the past. Also it surprises the reader as they may not expect a change and interest the reader even more. Also in the last two stanzas a lot of repetition has been used this is to reinforce the message of the poem "I Rise" "I Rise" "I Rise". No matter what you may say or do she will always overcome and rise to the top and that it is impossible to hold her down because she is a black woman. The poem "Of course when they ask about the 'Realities' of black women" by Grace Nichols. The main idea that this poem is about is that it doesn't matter what colour, religion, race, you may be, you should not be placed or categorised into a certain group, as all people are different inn their own ways. Grace Nichols thinks that it is absurd to categorise black people as she writes "of a black woman / or a white woman /or a green woman" This has been used because you cannot categorise a green woman then why should you categorise a black women when you don't all the black women in the world. ...read more.

The culture shows more In Grace's poem, I personal find this hard to accept and feel as if I'm not involved in this part of the poem. This may have been an intention to try and create the feeling of the black woman when white were not involving them. Maya's poem was the poem that made a statement tome as I felt more involved and that she was more aware of her audience. I also felt that it made more sense. The poem made me question myself and the way people of the white race have behaved inappropriately. The line which didn't work for me was "I am the dream and hope of the slave" this is because when this poem was written there would have been less slavery and I do not believe that she is the dream of the slave. The rest I very much like. Grace's poem confused me and some part did not make any sense to me so I found it very hard too follow in what was being said. This poem has a lot of depth. I think it is not straight to the point, this to gives the impression that Grace may still fear to speak about her past. The structure and shape of the poem I didn't like not like. To me it looked as thou no time had been taken was a rush and burst of thought all at once. Over all I preferred Maya Angelou's poem "Still I Rise2 I think that she is a very strong black feminist writer. I hope that in the future we will be looking at more of her work. 1 ...read more.