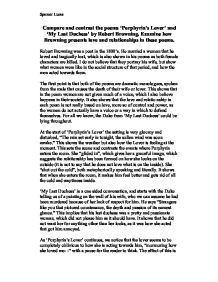 Compare and contrast the poems 'Porphyria's Lover' and 'My Last Duchess' by Robert Browning - Examine how Browning presents love and relationships in these poems.

Compare and contrast the poems 'Porphyria's Lover' and 'My Last Duchess' by Robert Browning. Examine how Browning presents love and relationships in these poems. Robert Browning was a poet in the 1800's. He married a woman that he loved and tragically lost, which is also shown in his poems as both female characters are killed. I do not believe that they portray his wife, but show what women were like in the social structure of that period, and how the men acted towards them. The first point is that both of the poems are dramatic monologues, spoken from the male that causes the death of their wife or lover. This shows that in the poem women are not given much of a voice, which I also believe happens in their society. It also shows that the love and relationship in each poem is not really based on love, more so of control and power, as the women do not actually have a voice or a way in which to defend themselves. ...read more.

'My Last Duchess' is a one sided conversation, and starts with the Duke telling us of a painting on the wall of his wife, who we can assume he had been murdered because of her lack of respect for him. He says "Strangers like you that pictured countenance, the depth and passion of its earnest glance." This implies that his last duchess was a pretty and passionate woman, which did not please him as it should have. It shows that he did not want her for anything other than her looks, as it was how she acted that got him annoyed. As 'Porphyria's Lover' continues, we notice that the lover seems to be completely oblivious to how she is acting towards him, "murmuring how she loved me- -" with a pause for the reader to think. The effect of this is to allow the reader time to notice that she definitely loves him, and has travelled through the harsh weather to meet him, it ...read more.

to his future wife's father that if she acts how his 'Last Duchess' acted, then he will happily have her suffer the same ending. 'Porphyria's Lover' goes for a completely different ending. The rhyming couplet emphasises the ending of "and yet God has not said a word". I think that he has chosen to end on this because his conscience tells him that he has done nothing wrong, and that his superiority as a man allows him to do as he wishes to preserve the love at that time. I personally do not think that Browning wrote these poems to express his opinions, but to show us what some relationships were like in his time. Although some of his past experiences may have influenced his work, such as the death of his wife being reflected in the death of women in the poems, I don't think either of the male characters are meant to be any kind of a comparison of himself. Spencer Lucas ...read more.