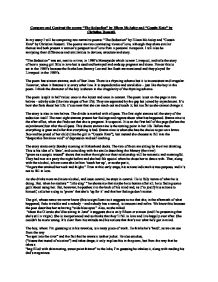 Compare and Contrast the poems &quot;The Seduction&quot; by Eileen McAuley and &quot;Cousin Kate&quot; by Christina Rossetti.

Compare and Contrast the poems "The Seduction" by Eileen McAuley and "Cousin Kate" by Christina Rossetti. In my essay I will be comparing two narrative poems: "The Seduction" by Eileen McAuley and "Cousin Kate" by Christina Rossetti. The poems are two contrasting views of love, although they share similar themes and both present a women's perspective of love from a personal viewpoint. I will also be analysing their differences and similarities in devices, structure and story. "The Seduction" was set, next to a river, in 1980's Merseyside which is near Liverpool, and tells the story of how a young girl falls in love but is used and betrayed and ends up pregnant and alone. I know this is set in the 1980's because the footballers Sammy Lee and Ian Rush are mentioned and they played for Liverpool in the 1980's. The poem has sixteen stanzas; each of four lines. There is a rhyming scheme but it is inconsistent and irregular. However, when it features it is every other line. It is unpredictable and unreliable - just like the boy in the poem. I think the character of the boy is shown in the irregularity of the rhyming scheme. The poem is split in half twice: once in the layout and once in content. The poem is set on the page in two halves - side by side (like two stages of her life). They are separated by the gap but joined by enjambment. It's how she feels about her life: it's so near that she can reach out and touch it; but too far so she cannot change it. The story is also in two halves. The divide is marked with ellipses. The first eight stanzas tell the story of the seduction itself. The next eight stanzas present her feelings and regrets about what has happened. Stanza nine is the after effect, when she finds out that she is pregnant. ...read more.

The poem has six stanzas; each of eight lines. Christina Rossetti wrote in the romantic era. As such, her poem is very organised with a regular rhythm, rhyming scheme and structure. The rhythm is very defined and strong. In each couplet, the first line has eight beats, and the second line has six beats. The rhythm also matches the rhyming pattern. The rhyming pattern is regular and consistent - with alternate lines rhyming- quite unlike "The Seduction". The structure is also very clear; because apart from the first line which contains enjambment, all the lines are pretty much the same length - again, unlike "The Seduction". The only exception to the above rules is the first line. It has seven beats instead of eight and the line is shorter than the others. The reason for this is enjambment. The line ends early and so the rhythm is delayed but carries onto the next line. This poem is a narrative and tells the story in first person - the girl/narrator is talking to her cousin and is telling her how she feels "Cousin Kate, you grew more fair than I." I think that this could be a true story that happened to the poet and she could have written the poem to express her feelings and to tell her cousin how she had made her feel as this would be easier than telling her face to face. The mood of the poem starts with happiness ("joy thereof") as she has been chosen by the amazing Lord. But quickly turns to rejection ("cast me by" and "changed me like a glove"), resentment ("chose you, and cast me by.") but then pride ("My fair-haired son, my pride") as she rises above the gossiping neighbours. The story starts with a poor young girl who has low-self esteem - we know this because she describes herself as "Not mindful I was fair" and also mentions her "flaxen hair". ...read more.

Regardless of the similar events in the two stories, the two endings are really different. In "The Seduction" the girl becomes depressed and suicidal ("better to destroy your life"), feels cheated and lost, and is ashamed of her baby. The end is a sad one. Whereas the girl in "Cousin Kate" rises above the gossip, and is proud of her baby. The ending is an uplifting one and is hopeful. Due to being pregnant and experiencing the brutality of life, both the girls are forced to grow up. In a way, the girl in "Cousin Kate" is more mature because she doesn't become demonised by gossip and gets on with her life ("Yet I've a gift you've not got"), whereas the other doesn't and falls into the "despicable, feminine void". However, the girl in "The Seduction" accepts the blame for what happened, whereas the other doesn't and blames Kate. I don't think the girls are to be fully blamed, as they were, as it was mostly the man's fault, but neither are they blameless as they were not physically forced into anything - they could have said no at any point. What I do not like is the way the two men have got off scotch-free, without any blame and are even maybe congratulated on their performance, and all the blame is put onto the girls and they're made to feel worthless. In my essay I analysed the two poems and looked at the contrast in similarities and differences between them. Both the poems are written about how a man betrays a young and innocent girl and uses her. They show a woman's view on love. Due to the time in which they were written, the amount of poetic devices used by the poets differ. Another thing that splits the two poems apart, is that of the girls' views on bearing illegitimate children. It doesn't matter that the society and environment of the poems are different, both girls were used and their dreams of finding true love and 'Mr Right' were cruelly snatched away by selfish men. By Emma Feldman 10Y2 ...read more.