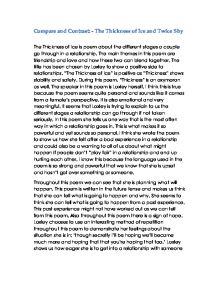 Compare and Contrast: - The Thickness of Ice and Twice Shy The Thickness of Ice is poem about the different stages a couple go through in a relationship. The main themes in this poem are friendship and love and how these two can blend together. The title has been chosen by Loxley to show a positive side to relationships. "The Thickness of Ice" is positive as "Thickness" shows stability and safety. During this poem, "Thickness" is an oxymoron as well. The speaker in this poem is Loxley herself. I think this is true because the poem seems quite personal and sounds like it comes from a female's perspective. It is also emotional and very meaningful. It seems that Loxley is trying to explain to us the different stages a relationship can go through if not taken seriously. In this poem she tells us one way that is the most often way in which a relationship goes in. This is what makes it so powerful and yet sounds so personal. I think she wrote the poem to show us how she felt after a bad experience in a relationship and could also be a warning to all of us about what might happen if people don't "play fair" in a relationship and end up hurting each other. I know this because the language used in the poem is so strong and powerful that we know that she is upset and hasn't got over something or someone. ...read more.

The quote, "The triple jumps and spins will become an old routine: and we will become content with simple movements." Proves they don't feel that they need to push themselves anymore and that they might be bored and can expect to be brought back down to earth be something that might ruin their relationship. The fourth paragraph is about how the relationship becomes unsteady and how it stops them being together. The quote, "the creeping cracks will be ignored" shows that they never noticed that their relationship was turning bad and that one or both of them was going to get hurt in the outcome. They stopped caring and noticing what was happening and now they are going to end up alone without each other. The second quote in this paragraph that I feel has a big part in this is; "we will scramble to save ourselves and not each other". This is a very important part of the poem as this is part when the two people become selfish and childish and don't care about each other as much as they should. This is a huge part in the poem and makes us realise that even though everything's looks ok, it might not be and might end up hurting you in the end run. Paragraph five shows us that they meet as strangers again and try to start a new. "Though secretly we'll be enemies", show us that they still don't forgive each other for what happened and that they can't forget what happened between them. ...read more.

The third paragraph is about how the vibe is turning from nerves to unsteadiness about the feeling of being watched. The repeated use of "Hawk" gives a negative vibe in places and makes us believe that they are being watched as a hawk is a bird of prey. Also, the use of the words hawk and dove was quite dramatic as these two are classed as enemies. They tend work alone and this shows there are negative parts and positive parts in this and it could also mean that this relationship could go either good or bad and that it is not decided yet. The fourth paragraph is about how they are hiding their feelings for on another because in past relationships they have told the other person and it has b=not worked out. They decided to keep it to themselves for longer so that they don't get hurt. "Not to publish feeling and regret it all too late" this is proving the statement I have just given is true. The last paragraph is about how they now feel in control of their feelings and possibly want to be more than friends. They now feel comfortable with each other and enjoyed each other's company. They are falling for each other which comes into the theme of love. I like the second poem more because they want to take it slowly and this shows passion and love in deepest corners. This is more caring and more sweet, shows a soft side to poems. ...read more.