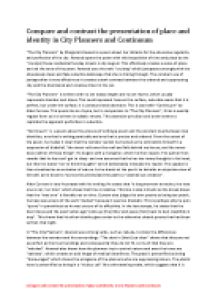 ﻿Compare and contrast the presentation of place and identity in City Planners and Continuum ?The City Planners? by Margaret Atwood is a poem about her distaste for the obsessive regularity and perfection of the city. Atwood opens the poem with vivid exposition of time and place as she ?cruis[es] these residential Sunday streets in dry August. This effectively creates a sense of place and set the tone of the poem. Atwood uses the verb ?cruising? which juxtaposes strongly with the obsessively clean and fake suburbia landscape that she is driving through. The constant use of juxtaposition is very effective as it creates a stark contrast between the ordered and suppressing city and the disordered and creative driver in the car. ?The City Planners? is written with no set stanza length and no set rhyme, which usually represents disorder and chaos. ...read more.

He begins with a metaphor, which he then rejects. The author then reveals that he has can?t get to sleep and one assumes that he has too many thoughts in his head, but then he states ?nor to think thoughts? which deliberately misleads the reader. The speaker is then visualised as an onlooker of nature. As he stands at the porch he beholds an objective view of himself, as he discerns ?across the privets/and the palms a ?washed out creation?. Allen Curnow is very frustrated with his writing. He states that ?a long moment stretches, the next one is not / on time? which shoes that time is relative. This line is also mimetic as the break shows that the ?next one? is literally not on time. Curnow also judges his own poetry as being too poetic. Curnow was unsure of the verb ?dusted? because it was too dramatic. ...read more.

The plastic hose is personified as being in a ?vicious coil? like a threatening snake, which suggests that it is being constrained in a coil to prevent it from unravelling and attacking the lawn. Difference is also portrayed as a sickness and even a small detail that is disordered is as painful as a ?bruise?. In the last three stanzas, Atwood directly addresses the City Planners . Atwood talks of how these City Planners, who are so full of themselves, think that all of their suburban creations will make the world better. Atwood disagrees, implying that modern suburbia will be ?future cracks in the plaster?. However, this symbolism of perfection will eventually collapse and the effort of the city planners will come to nothing, just like ?vanishing air in the madness of snows?, further implication that the planners are disorientated and confused. Compare and contrast the presentation of place and identity in City Planners and Continuum ...read more.